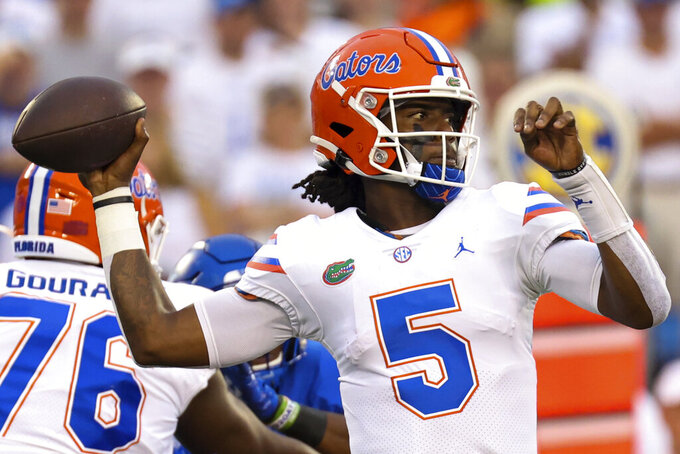 Florida quarterback Emory Jones looks to throw a pass during the first half of an NCAA college football game against Kentucky in Lexington, Ky., Saturday, Oct. 2, 2021. (AP Photo/Michael Clubb)

GAINESVILLE, Fla. (AP) — Florida needs a pick-me-up, and there are few better cures for a broken-hearted Gators team than having Vanderbilt next on the schedule.

The 20th-ranked Gators will host the skidding Commodores for homecoming Saturday. It’s a chance for Florida to move past a gut-wrenching loss at Kentucky that essentially knocked coach Dan Mullen’s team out of contention in the Southeastern Conference’s Eastern Division and gain some confidence and momentum with No. 2 Georgia on the horizon.

“That game is in the past,” Florida tight end Kemore Gamble said. “Don’t let that game bring you down, keep playing hard. Keep playing for your family, your friends, the fans and most importantly your teammates.”

Vanderbilt’s last league victory came on Oct. 19, 2019, against Missouri. Its last road win in SEC play came on Oct. 27, 2018, at Arkansas. The Gators are 38 1/2-point favorites, according to FanDuel Sportsbook.

“The environments are unforgiving on the road,” first-year Commodores coach Clark Lea said. “I think that’s also exciting for us. We look forward to playing in those hostile environments. We’ll get up for that.”

Playing on the road doomed the Gators a week ago. Florida was flagged 15 times for 115 yards, including eight false start penalties, in a 20-13 loss that came down to the final series.

The Gators ran six plays inside Kentucky’s 10-yard line in the waning seconds, failed to score and lost in Lexington for the first time since 1986.

“You can’t dwell on it,” Florida cornerback Tre’Vez Johnson said. “You can’t keep focusing on what you did wrong. We fix the little mistakes and move on to next week. The only way we’re going to move forward is staying positive and coming out here ready to work.”

The Gators have won seven in a row and 29 of the last 30 in the series, with the last loss coming at Florida Field in 2013. Despite the success, Mullen insisted his players won’t overlook Vanderbilt and will be ready to regroup.

“If you would have been out on a run with me this morning and we got within the last half mile, I’m going to sprint and beat you,” Mullen said. “And that was just going on a nice morning jog. … I like winning. It’s a heck of a lot (nicer), and that’s just going for a walk down the street.

“Go play a friendly game of pickup hoops and it gets close, don’t be surprised if you get an elbow in the eye. And that’s just lunchtime hoops. I promise this: It’s certainly not hard to get motivated to go play an SEC game. I don’t care whether we play on Friday morning at 6 a.m. in the parking lot or we play at noon in the Swamp. I don’t care. But we’ll go play.”

The Commodores already have ended three different skids under Lea. Their victory at Colorado State snapped a 13-game losing streak against Football Bowl Subdivision teams, an 11-game skid overall and also a 10-game skid on the road. Their 30-28 win over UConn last week ended an eight-game skid at home.

Florida backup quarterback Anthony Richardson played just six snaps last week at Kentucky, leaving many to wonder whether he could have made a difference in the loss. Richardson has been dealing with a strained right hamstring for a month, but Mullen insists he's fine.

Vanderbilt's Ken Seals is coming off his best game of the season. The sophomore quarterback threw for 333 yards with two touchdowns in Vanderbilt’s win over UConn. The Commodores also had a pair of 100-yard receivers in that victory, something they hadn’t done since Nov. 26, 2016. Will Sheppard had 119 yards and two TDs, and Chris Pierce caught nine passes for 103 yards.