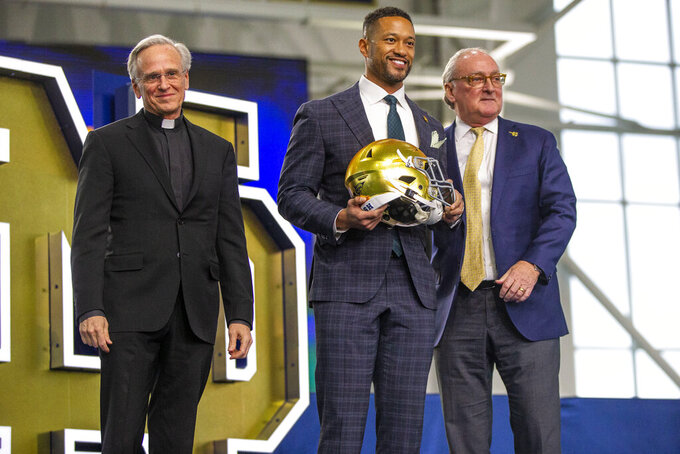 Freeman, who moved up from defensive coordinator Dec. 3 after Brian Kelly left for Louisiana State, has put the Fighting Irish (11-1) through seven practices preparing for their matchup with No. 9 Oklahoma State (11-2) on Jan. 1 in Glendale, Arizona. He likes those practices to be competitive from the opening whistle.

Freeman has his offensive and defensive units going against each other – for instance, receivers against defensive backs – with the losing unit having to run field-width sprints, also known as gassers.

“I call it our ‘Opener,’” Freeman said. “It’s a competitive situation. Offense vs. Defense. They don’t know what it’s going to be. I want to put the ball down and see our guys compete. It’s nothing more than continuing to develop that competitive spirit.”

Naturally, there’s a lot of cheering for your guys and good-natured taunting of the opposition as graduate defensive end and captain Myron Tagovailoa-Amosa admitted during a media availability after the team's second practice.

The defense, apparently, has been doing just fine in the five “Openers” since – the Irish are keeping those results to themselves – but players on both sides of the line of scrimmage see the benefits as they prepare for the Cowboys without a pair of All-Americans. Running back Kyren Williams and free safety Kyle Hamilton have opted out of the game to prepare for the 2022 NFL Draft.

“It’s a fun little way to build that competitive spirit,” said junior linebacker JD Bertrand who led the Irish in tackles with 92, including five for lost yardage. “Practices have been great, too. We’ve had a lot of 1s vs. 1s, 1s vs. 2s, trying to get better by going against our own best players.”

The Irish, who concluded the season on a seven-game winning streak following their 24-13 home loss on Oct. 2 to No. 4 Cincinnati (13-0), know they will have to be on top of their game against coach Mike Gundy’s Cowboys, who are coming off a 21-16 loss to No. 7 Baylor in the Big 12 Championship Game. Defensively, Oklahoma State ranks third in total defense (278.4 yards per game), eighth in scoring defense (16.8 points per game) and leads the nation in sacks (55) and tackles for loss (113).

“The intensity has changed … we practice at a high tempo,” said freshman running back Logan Diggs, who came on late to average 4.3 yards a rush and total four touchdowns. Diggs, sophomore Chris Tyree and freshman Audric Estime will be asked to replace Williams, who rushed for 1,002 yards and 14 touchdowns, had 42 receptions for 359 yards and three scores, and averaged 10.8 yards per punt return.

“We have a great running back room and I feel more than confident they’ll do a great job,” senior wide receiver Braden Lenzy said. “(Practice) has been more competitive. He (Freeman) always mentions enhancing, and there’s a direct correlation with that in our practices. It isn’t just an on/off switch from practice to games. It really feels like we’re playing ball every day.”

The defense is still getting used to not having Freeman overseeing things as much – senior defensive analyst Nick Lezynski is working with the linebackers in Freeman’s place and working with special teams now that coordinator Brian Polian has joined Kelly in Baton Rouge.

“He’s involved,” said cornerbacks coach Mike Mickens, who served under Freeman at Cincinnati before joining Kelly’s staff for the 2020 season. “We just all got to pitch in a little bit more now that he’s got a little bit more on his plate.”

Offensive coordinator Tom Rees understands. “He’s probably 60-40, still slanted towards the defense,” Rees said. “I think he’s done a pretty good job staying neutral through some of the competitive periods. He’s been very supportive on both sides of the ball and handled his new duties very well.”