No. 9 Mississippi runs wild and holds off Auburn 48-34 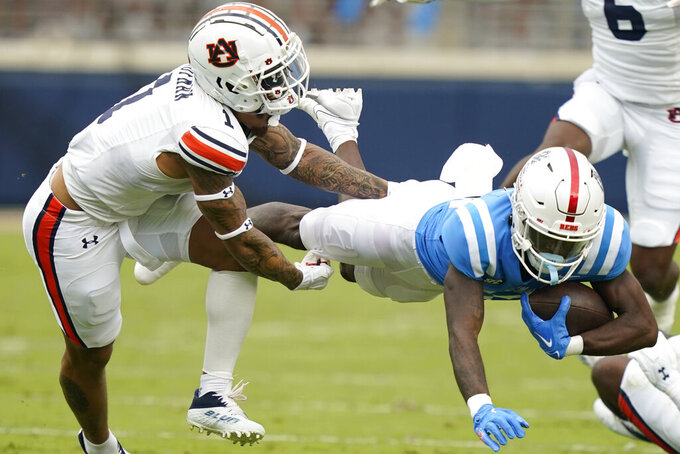 Jaxson Dart is warming up to the idea of being a running quarterback.

Dart ran for 115 yards, one of three Mississippi 100-yard rushers, and the ninth-ranked Rebels rolled up 448 on the ground in a 48-34 victory over Auburn Saturday.

It was the first time since 1976 the Rebels had three 100-yard rushers in a game.

"You don’t get that every week,” Dart said. “I think the best thing was just about every play you could feel Auburn wearing down more and more.”

Quinshon Judkins had 139 yards on 25 carries and scored on a 41-yard run with 6:26 remaining to build the final margin.

"The defense wasn’t up to our standards. But we had to stop them from running and it was good to see us finish,” Ole Miss coach Lane Kiffin said.

Dart, the Southern California transfer, finished 9 of 19 for 130 yards with three touchdown passes and ran for 115 on 14 carries. It was his second 100-yard rushing game of the season. He had only 43 yards rushing in six games last season at USC.

Zach Evans had 136 yards on 21 carries and a touchdown.

Tank Bigsby led Auburn with 179 yards on 20 carries with touchdown runs of 2 and 50 yards. The Tigers had 301 yards rushing, but three turnovers.

Auburn: The coaching future of Bryan Harsin remains uncertain and this performance will only increase the noise surrounding the program. The Tigers played well after falling behind 21-0 in the opening 16 minutes. Ashford directed three consecutive scoring drives in the second half.

After an off week, three of the next four opponents come to The Plains and the possibility for a postseason bowl appearance remains.

Ole Miss: After six consecutive losses to Auburn, many in heartbreaking fashion, clearing this hurdle was a high priority.

What remains is a back-loaded schedule: Three of the next four games are on the road, with the only home games against No. 3 Alabama.

“You know, we were looking for something to give us an edge,” Kiffin said. “It was huge for our players to make that play. Obviously, it helped in this game a lot.”

The No. 9 Rebels are not expected to drop, but a win over an unranked opponent may not be enough to move up significantly.

Auburn: The Tigers have an open date before a home game against Arkansas on Oct. 29. Will Harsin, now 9-11, still be leading the Tigers by then?

Ole Miss: The Rebels begin a two-week road trip at LSU on Saturday.