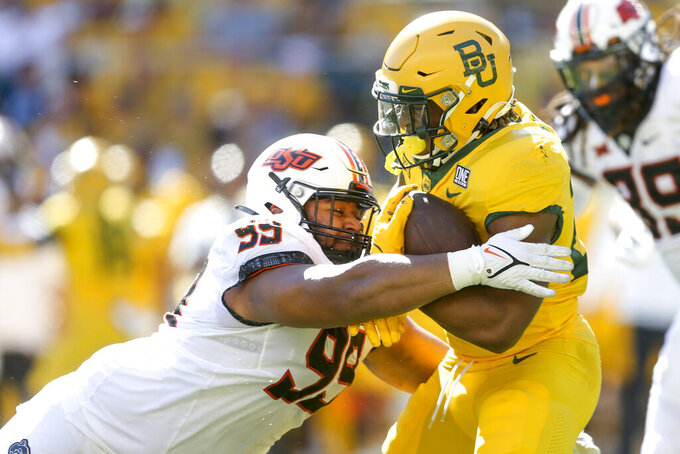 WACO, Texas (AP) — Even as Jaden Nixon stumbled forward and had to keep himself from falling down, Oklahoma State coach Mike Gundy knew no one was catching the speedster.

Nixon’s 98-yard kickoff return to open the second half started a flurry of 39 combined points in the third quarter, and the ninth-ranked Cowboys beat No. 16 Baylor 36-25 on Saturday in a rematch of last year’s Big 12 championship game.

Nixon found an open gap in the middle of the field, broke free from the grasp of Baylor’s Devyn Bobby at the Oklahoma State 35, regained his balance and easily outran everyone to the end zone

“When he kind of fell and then he got up, most of time the defense will catch you because he’s fallen. But I mean, I was watching ... it takes him two steps and he’s back at close to 4.5 speed, and he can roll,” Gundy said.

The Cowboys (4-0, 1-0 Big 12) also beat Baylor in the regular season last year, but came up inches short of their first conference title since 2011 when the Bears made a fourth-down stop just short of the end zone in the final seconds of the championship game.

This time, the Cowboys took the lead for good with a touchdown on their opening drive.

Oklahoma State quarterback Spencer Sanders threw seven picks in his two games against Baylor last season, including four in the Big 12 title game, but he was more efficient this time. He finished 20-of-29 passing for 181 yards with a touchdown and an interception. He also ran 14 times for 75 yards with several scrambling runs and a 1-yard TD plunge.

“This game was definitely more personal for me, and I just made sure I did everything I could to hold myself accountable,” Sanders said.

After Nixon’s return, Baylor (3-2, 1-1 Big 12) responded with Blake Shapen’s 49-yard TD pass to Monaray Baldwin, who added a 70-yard catch-and-run score on a fourth-down play later in the third. True freshman Richard Reese had a 1-yard TD run on a short drive set up when Christian Morgan intercepted Sanders.

“Third quarter was like a video game,” Gundy said.

Baylor trailed 23-3 after Nixon's runback, but made it a game after that.

“I’m proud of our team for the second half we had and the ability to start that third quarter with some emotion and energy, which frankly was missing in the first and second quarter,” Baylor coach Dave Aranda said.

Shapen completed 28 of 40 passes for 345 yards and Baldwin caught seven passes for 174 yards. Reese had 85 yards and a score on 17 carries. Six of the true freshman’s rushing TDs have come in Baylor’s three home games.

Another long kickoff return for Oklahoma State, with Brennan Presley taking it to midfield after Reese scored, was followed immediately by Braydon Johnson's incredible 49-yard catch and then Dominic Richardson's 1-yard run. The Cowboys added a 19-yard field goal after Shapen's fourth-down incompletion from the Baylor 33 gave Oklahoma State the short field.

“That’s a big win. ... It just shows that the young guys stepped up, you know, did their job,” Sanders said. “That’s a great team to win against, especially on the road in their own house.”

A week after opening Big 12 play with a win at Iowa State, the Bears couldn't match that in their own stadium. Their only lead came after a field goal on the game's opening drive.

"We definitely had points where we were low on that (energy level) throughout the game,” Bears standout left tackle Connor Galvin said. “At those times, we had to take a deep breath and like ‘alright guys, let’s pick it back up.’ Let’s go. Let’s fix the issue on the field.”

Oklahoma State made some highlight catches for Sanders. That started with Bryson Green's contested leaping catch in the back corner of the end zone for an 8-yard TD on their opening drive. On Johnson's 49-yard catch in the third quarter, he reached back and through a defender to make the grab near the sideline, and when twisting and turning, his left foot slid out of bounds just short of the end zone.

Oklahoma State: The Cowboys were solid coming off their open date and rose to the challenges of playing their first ranked opponent and leaving Stillwater for the first time.

Baylor: The Bears had won nine consecutive home games since a 42-3 loss to Oklahoma State in the 2020 regular-season finale. That game was pushed back two months because of COVID-19, and played when Baylor was without 47 people — players, coaches and support personnel.

Oklahoma State will certainly remain in the top 10, and could even climb a spot. Baylor could hang in near the bottom of the poll since both of its losses are against Top 25 teams, or could fall completely out of the rankings.

Baylor has a Saturday off before playing its next game at West Virginia on Oct. 13, a Thursday night.