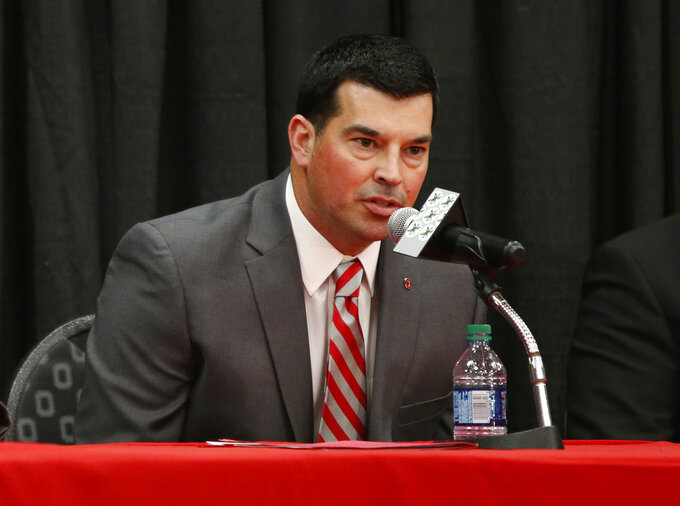 FILE - In this Tuesday, Dec. 4, 2018 file photo, Ohio State NCAA college football offensive coordinator Ryan Day answers questions during a news conference announcing his hiring as head coach to replace Urban Meyer, who announced his retirement in Columbus, Ohio. Day is the Buckeyes’ co-offensive coordinator under Urban Meyer until the conclusion of the 105th edition of the Rose Bowl. Right after that, Day becomes the 25th head coach in Ohio State history, charged with preserving and improving a storied program coming off one of its most successful stretches.(AP Photo/Jay LaPrete, File)

LOS ANGELES (AP) — Ryan Day is definitely not the first assistant coach to spend his collegiate career filling up a notebook with plans, diagrams and all sorts of other information that will come in handy if he ever gets his chance to be a head coach.

Unlike most of those aspiring sideline stars, Ohio State's head-coach-in-waiting knows exactly when he'll get to employ all of that collected wisdom.

Day is also adding a whole lot of new knowledge to his book out in California this week while the Buckeyes (12-1) prepare for the Rose Bowl against Washington (10-3) on Tuesday.

"The book probably goes back a decade," Day said. "I've wanted to be a head coach ever since I started coaching. I started taking notes a long time ago."

Day is the Buckeyes' co-offensive coordinator under Urban Meyer until the conclusion of the 105th edition of the Rose Bowl. Right after that, Day becomes the 25th head coach in Ohio State history, charged with preserving and improving a storied program coming off one of its most successful stretches.

But for a few more days, Meyer is still in charge. That's just fine with Day, who poured himself into the Buckeyes' December recruiting before getting ready for his boss' big retirement party in Pasadena.

"It's actually been even smoother than I thought it would be," Day said. "It's been really good. Things have been kind of business as usual, and then on the second (of January), we go from there."

The Buckeyes' succession plan appears to be going well, but Day won't consider it a complete success unless they complete another stellar season with a win over the Huskies. The past month has been filled with a mix of transition planning and the normal bowl-month grind since shortly after the Big Ten title game when Meyer announced his plan to step down.

Day already filled in for Meyer earlier this year, going unbeaten in a three-game stint. This week is different, and both men know it.

"There's a great relationship there between Coach and I, and he's kind of handing this thing off to me as we go," Day said.

Day has already thought about his role once he sits in the big chair: Although he hasn't decided whether he'll call the Buckeyes' plays, he doesn't want to relinquish a voice in the day-to-day game planning, rejecting the idea of being a CEO head coach.

"I still want to have a heavy hand in the offense," Day said. "I think the guys on offense are really excited, and there's a lot of energy and positive momentum on our side of the ball. I want to keep that going."

Day has been less forthcoming about his plans for the Buckeyes' staff, saying he'll wait until after the game. Defensive coordinator Greg Schiano, the former Rutgers and Tampa Bay head coach, said he would like to stay, but he confirmed nothing this week — and his plans could conceivably be shuffled by the head coaching carousel still turning across the country.

"I think Ohio State is in great position," Schiano said. "Coach Meyer has developed a tremendous culture, and Coach Day, I know, will put his stamp on it. But the makings of a long-term success are in place."

Day has learned plenty from Meyer in their two years together, but he has been influenced even more by another vaunted college coach.

He played quarterback at New Hampshire under offensive coordinator Chip Kelly, who subsequently hired Day as his quarterbacks coach with the Philadelphia Eagles and San Francisco 49ers. Kelly now spends half of his Saturdays in the Rose Bowl with UCLA, which just completed the worst season of Kelly's college coaching career at 3-9.

Day and Kelly caught up earlier this week in LA, spending time together with their wives.

"Obviously Urban is a huge part of this thing moving forward for me as a mentor, and Chip is second," Day said. "You go to them for advice. They've been in this thing before. They've been a head coach. The thing that keeps coming back to me is, 'Just be yourself and trust your instinct, because you're built for this.'"