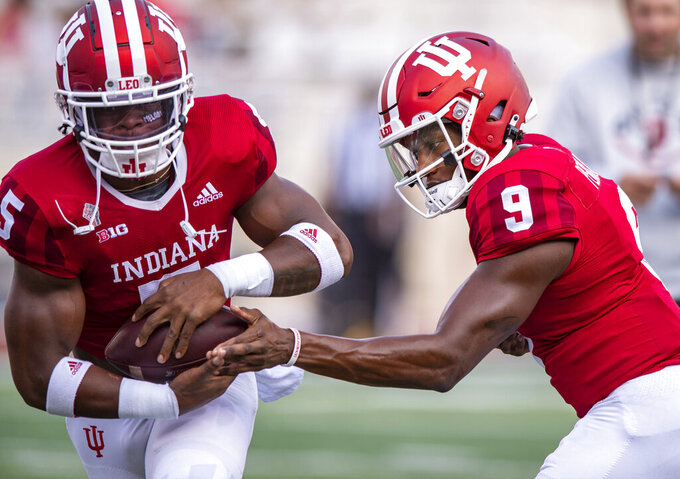 Indiana quarterback Michael Penix Jr. (9) hands off to running back Stephen Carr (5) as the team warms up before an NCAA college football game against Idaho, Saturday, Sept. 11, 2021, in Bloomington, Ind. (AP Photo/Doug McSchooler)

Doctors gave Indiana quarterback Michael Penix Jr. the all clear to play this weekend at Western Kentucky and Hoosiers coach Tom Allen said he remains confident his star will pull himself out of an early-season funk.

Allen said Penix would remain the starter despite concerns over his low completion percentage and sudden penchant for turnovers.

“Michael Penix is our starting quarterback and I believe in him with 100% of my heart and know that our team feels the same way," Allen said. “Again we’re going through this together and that, to me, if you falter in times of trouble, how little is your strength."

Penix threw three interceptions and had two returned for scores in an embarrassing season-opening loss at Iowa. Statistically, it was the worst start of his career.

He performed better against Idaho in a Week 2 victory but struggled again Saturday, throwing three more interceptions in a loss to No. 8 Cincinnati. Penix did not speak with reporters after the game, instead seeking medical attention for what appeared to be an injury to his throwing arm. He was not made available to reporters Monday.

Through three games, Penix has looked like anything but the breakout star of 2020. He's completing just 48.3% of his throws with six interceptions and four TD passes. He is back after suffering three successive season-ending injuries but now has a fresh injury.

“Michael had an X-ray and an MRI on his non-throwing hand, both came back good so he should be fine physically," Allen said. “You said it — he made some really good plays, made some really good throws that not many guys could make. But the mistakes were costly. It’s about protecting the football and he knows it."

Jack Tuttle replaced Penix late last season and helped the Hoosiers close out the win over Maryland and led Indiana to a victory at Wisconsin. He also played the second half of the loss in the Outback Bowl with a separated throwing shoulder.

For now, though, players and coaches back Penix, believing he will turn things around.

“We expect to be much more efficient in the pass game," offensive coordinator Nick Sheridan said. “Michael knows that. So we've got to correct it, coach it. We’ve just got to get the bad out of there. You can’t beat good teams turning the ball over at the rate we are."