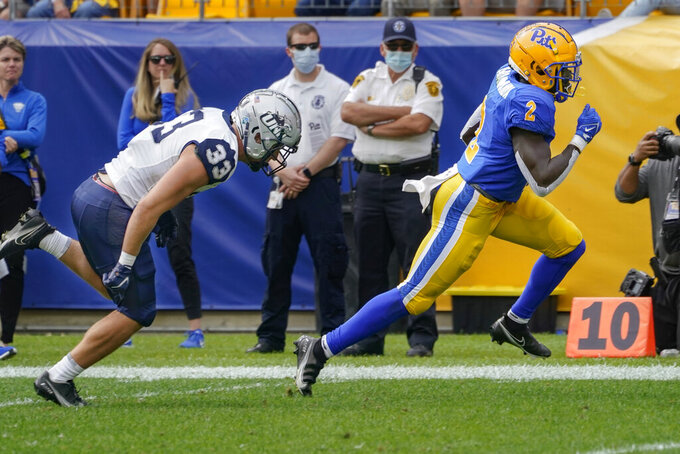 Pittsburgh running back Israel Abanikanda (2) eludes New Hampshire safety Kenny Fazio (33) on his way to a touchdown during the first half of an NCAA college football game, Saturday, Sept. 25, 2021, in Pittsburgh. (AP Photo/Keith Srakocic) 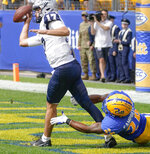 “That's what it's supposed to look like,” the Pittsburgh coach said after watching the Panthers drill New Hampshire 77-7 on Saturday.

Except last week during a stunning home loss to Western Michigan that brought his team's solid start to a crashing halt, it didn't. Given seven days to regroup, Pitt (3-1) wrapped up nonconference play with one of the greatest offensive displays in the program's 117-year history.

Kenny Pickett threw for 403 yards and five touchdowns and ran for another. Jordan Addison hauled in six passes for 179 yards and three scores and freshman running back Rodney Hammond ran for 100 yards and reached the end zone three times. The Panthers piled up a school-record 707 yards and had little trouble against the overmatched Wildcats (3-1). Pitt's 77 points were the most by the Panthers since an 88-0 win over Westminster in 1926.

“Coming off last week, I think everyone was (ticked) off and wanted to come in and get a win and get a win convincingly like that," Pickett said. “I think (we built) some confidence going into conference play.”

That hasn't been an issue all season for the offense. Pickett already has 15 touchdown passes through four games, two more than he managed all of last season. His 1-yard touchdown plunge on the Panthers' opening drive gave him 17 rushing touchdowns for his career, the most ever by a Pitt quarterback.

Pickett completed 24 of 28 passes and led the Panthers to touchdowns on their eight possessions with him in the game.

“It takes 11 (players)," Narduzzi said. “It's not just Kenny all by himself. He's got an offensive line that's protecting him, giving him time to make those throws and he's got guys making catches."

New Hampshire, ranked 22nd in the Football Championship Subdivision, saw any hopes of the school's first win over a Power Five program in 15 years evaporate after falling behind by four touchdowns in the game's first 14 minutes.

The Wildcats allowed a safety on their opening possession and saw its second end by having Pitt's Damarri Mathis step in front of a pass by Bret Edwards and return it 35 yards for a touchdown that made it 14-0 before the game was 5 minutes old.

The scores were emblematic of a bounce-back performance by the Panthers. Pitt gave up 160 yards of offense a week after surrendering 516 to Western Michigan.

“I haven't lost faith in our defense,” Narduzzi said.

Edwards spent most of the afternoon under heavy duress, completing 9 of 20 for 42 yards and a touchdown and an interception. Carlos Washington Jr. ran for 91 yards for the Wildcats, who received $425,000 to travel to Heinz Field.

Pitt held a moment of silence before the kickoff for noted orthopedic surgeon Dr. Freddy Fu, who died on Friday at age 70 following a bout with melanoma.

Fu, a pioneer in sports medicine who became one of the most renowned surgeons — particularly for high-profile athletes — in the country, served as chair for the school's the Department of Orthopaedic Surgery and worked out of the UMPC Freddie Fu Sports Medicine Center.

New Hampshire: The real season for the Wildcats begins next week. While the program's best start since 2009 came to a halt, New Hampshire

Pitt: No score total could wipe out the defensive meltdown against Western Michigan. However, the Panthers wasted little time dominating an opponent it was expected to dominate.

“One way or another it’s a launching pad,” Narduzzi said. “Regardless what we did today, it does not matter. It does not matter. We’re going to play Georgia Tech down in Atlanta again for the third year in a row, and we’ve got to be ready to go.”

Pittsburgh: Pitt has won each of its last three meetings with the Yellow Jackets.