Porter leads way as No. 15 Northwestern runs over Illinois 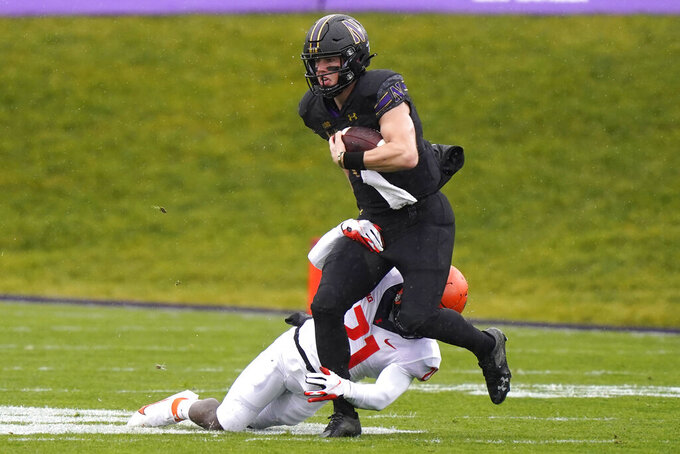 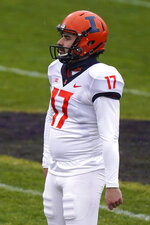 EVANSTON, Ill. (AP) — Northwestern was at the bottom of the Big Ten West a year ago, a collapse the Wildcats didn't see coming after winning the division in 2018.

It didn't take them long to get back on top. Now that they're finished with the regular season, they can turn their attention toward No. 3 Ohio State and the conference championship game.

Cam Porter ran for a career-high 142 yards and two touchdowns, Evan Hull added a season-best 149 yards on the ground, and No. 15 Northwestern tuned up for the Buckeyes by beating Illinois 28-10 on Saturday.

Northwestern rushed for 411 yards while outgaining Illinois 493-262. The Wildcats ran for a school-record 478 against Boston College in 1961.

“It's been a great season for us,” Northwestern coach Pat Fitzgerald said. “We obviously stubbed our toe one time. But the rest of the year, those guys have been resilient. They've been through a ton.”

The Wildcats' focus now shifts toward Ohio State. The schools will meet in the title game for the second time in three years.

Northwestern won the Big Ten West after finishing last in the division in 2019. The Buckeyes had their ticket to Indianapolis punched when conference administrators and athletic directors called an audible, voting to drop the six-game requirement for eligibility.

“I’m sure we’re gonna be underdogs by, like 70,” Fitzgerald said.

Peyton Ramsey threw for 82 yards and a touchdown, completing 7 of 12 passes against a short-handed defense, and the Wildcats bounced back from a loss at Michigan State two weeks earlier. They had an unexpected bye last week when Minnesota canceled their game because of a COVID-19 outbreak within its program.

Brandon Peters threw for a season-low 21 yards, completing 3 of 14 passes. The senior started the finale after Isaiah Williams replaced him in the fourth quarter of last week’s 35-21 loss to Iowa.

Williams threw a 46-yard TD to Brian Hightower in the fourth.

Safety Derrick Smith got ejected for targeting a receiver in the second quarter, another blow for an already thin defense. The Illini were down two free safeties with Tony Adams testing positive for COVID-19 and Nate Hobbs out because of contact tracing. Defensive linemen Jamal Woods and Roderick Perry II, linebackers Khalan Tolson and Delano Ware and safety Sydney Brown were out for reasons not explicitly tied to the coronavirus.

The Wildcats weren't thrilled this week after Illinois linebacker Milo Eifler said the Illini got to “beat up on our little brothers." He also called Northwestern an “awful school” and purple a “disgusting” color.

Fitzgerald said someone sent him the video. And the comments did not go over well with his players.

“We take it personal,” linebacker Paddy Fisher said. “We kinda looked at that as a sign of disrespect. We're not gonna let anybody disrespect us.”

It's not the first time in recent weeks Northwestern felt insulted. The team took issue with ESPN analyst Joey Galloway prior to their win over Wisconsin, when he told host Rece Davis the Wildcats have "a bunch of Rece Davises out there running around.”

Illinois: Not a good way to finish the year for the Illini. They are 17-39 since Smith took over in 2016 and have nine straight losing seasons with two bowl losses in that span.

Northwestern: The Wildcats got off to a somewhat shaky start, then dominated on the way to their sixth straight win against Illinois. That matches a six-game run against Wisconsin from 1929-37 as Northwestern's second-longest against a Big Ten opponent.

Illinois: The Illini will try to regroup after another rough season.

Northwestern: The Wildcats will try to stop an eight-game losing streak to Ohio State when they meet Dec. 19 in Indianapolis. The Buckeyes lead the all-time series 63-14-1.