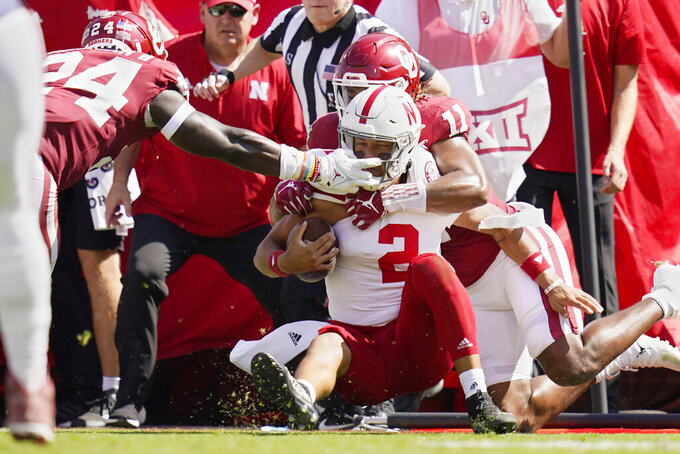 Nebraska quarterback Adrian Martinez (2) is brought down by Oklahoma linebackers Nik Bonitto (11) and Brian Asamoah (24) in the first half of an NCAA college football game, Saturday, Sept. 18, 2021, in Norman, Okla. (AP Photo/Sue Ogrocki)

NORMAN, Okla. (AP) — Oklahoma and Nebraska played as if they were trying to uphold the history of the rivalry.

Spencer Rattler passed for a touchdown and ran for another, and No. 3 Oklahoma held on to beat Nebraska 23-16 on Saturday.

“It was just a hard-fought game," Oklahoma coach Lincoln Riley said. “You knew it would be. There’s a lot of pride in these two programs. Both these programs have won a lot of games, a lot of championships. To bring this game back — I think everybody sensed how special it would be. Both teams rose to the occasion and gave us a great college football game."

It was their first meeting since 2010 — right before Nebraska left the Big 12 for the Big Ten — and it was memorable and much closer than expected. The Sooners were a three-touchdown favorite and there were even reports during the offseason that Nebraska looked at possibly trying to reschedule the game for its rebuilding program to another year.

Turns out the Huskers were more than game.

Nebraska got the ball trailing by a touchdown with 57 seconds remaining and no timeouts. The Sooners sacked Adrian Martinez twice on the final drive, and the Cornhuskers could not manage a first down.

Martinez passed for 289 yards and a touchdown for Nebraska (2-2), which sought its first win over a ranked team since 2015.

“Our guys aren’t into moral victories," Martinez said. “We want to win games. Simple as that. There are definitely a lot of positives to take away from today, and we will do that once we watch the film. But at the end of the day, we lost the game. So that is that."

Oklahoma opened with an old-school 14-play, 75-yard drive. Rattler sneaked in from the 1 to give the Sooners a 7-0 lead.

Nebraska responded with a 14-play drive, but the Huskers were derailed by four penalties. Connor Culp's career-long 51-yard field goal put the Cornhuskers on the board.

Oklahoma led 7-3 at halftime. In the third quarter, Oklahoma’s Mario Williams took a pitch and threw backwards to Rattler, who found Marvin Mims open for a 23-yard gain. The Sooners cashed in and took a 14-3 lead when Rattler connected with Jeremiah Hall in the end zone for a 1-yard touchdown pass.

Oklahoma quickly responded. Isaiah Coe blocked the extra point, and Pat Fields returned it 100 yards for two points. It was Oklahoma’s first blocked extra point return for a 2-point conversion since Zack Sanchez ran one back against TCU in 2014.

Brooks scored on a 2-yard run early in the fourth quarter, and the extra point put the Sooners up 23-9.

Martinez completed a 55-yard pass to Zavier Betts, and a 15-yard unsportsmanlike conduct penalty against Oklahoma’s sideline was tacked on to take the ball from the Nebraska 13 to the Oklahoma 17. Sooner cornerback D.J. Graham’s spectacular leaping one-handed interception on fourth down snuffed out the threat.

Oklahoma knocked nearly five minutes off the clock with its next drive, leaving the Cornhuskers with little time to respond.

Nebraska coach Scott Frost said he was proud of the way his team played.

“We’re going to get more opportunities to win a big game," he said. “But if they play like that — like we played today all year, and fight that hard all year, we’re going to have a chance in a lot of games. And as disappointed as I am, I’m happy for the way that they competed.”

Nebraska: The Cornhuskers fought valiantly and the defense put up another solid performance. Nebraska had allowed seven points to Fordham and three to Buffalo in its previous two games. But the Cornhuskers will need to cut down on penalties and mistakes to compete in the Big Ten.

Oklahoma: The Sooners had another strong defensive effort a week after shutting out Western Carolina 76-0. Nebraska had averaged 517 yards per game, but Oklahoma held the Cornhuskers to 384 yards. The Sooners slogged their way through non-conference play unbeaten, but they will need to figure out how to finish drives better heading into league play.

Oklahoma likely won't lose much ground, even though the game was closer than expected.

Bob Stoops, who coached Oklahoma to the 2000 national title, was honored at halftime for being inducted into the College Football Hall of Fame’s 2021 class.

Stoops won 190 games in 18 seasons with the Sooners and led the Sooners to four BCS National Championship Game appearances.

Martinez on the experience: “It was awesome. It was. The atmosphere, just how close you are on the sideline. I mean, we maybe had a foot of room over there (in front of the fans), and I loved it. I had the student section chirping me. Let’s go. Bring it on, you know what I mean? So you've got to love it. It’s a part of college football. And I was happy to be here today.”