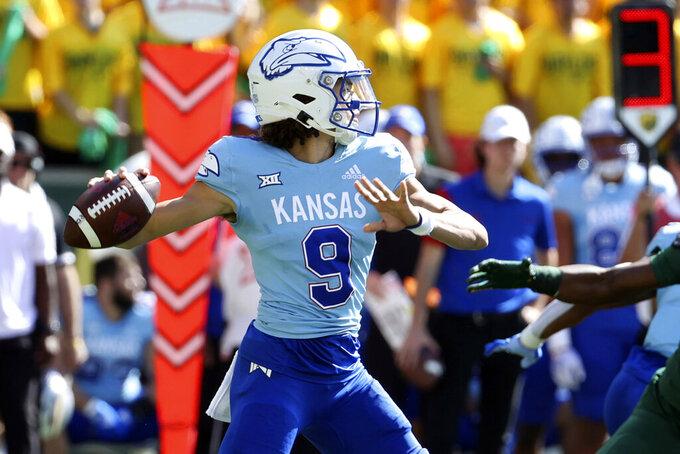 WACO, Texas (AP) — True freshman Richard Reese ran for 186 yards and two touchdowns, including a late game-clincher as the Bears held on to beat Kansas 35-23 on Saturday for their first victory in nearly a month.

“The mindset was start fast," Baylor coach Dave Aranda. “That's kind of a glimpse of who we can be, and we’re still just scratching and clawing and fighting to be there. ... It's elusive though"

Because the Jayhawks (5-3, 2-3) got within 28-23 when quarterback Jason Bean scrambled 4 yards for a touchdown with 6 1/2 minutes left. That ended a 93-yard drive after Baylor was stopped on fourth-and-1, and included completions of 29 and 47 yards by Bean.

”He played physical and played with an edge," Aranda said of Reese.

Kansas is still without standout quarterback Jalon Daniels, who missed his second game in a row since injuring his right (throwing) shoulder after being hit late in the first half of a loss to TCU on Oct. 8. Bean was 16 of 27 for 232 yards and a touchdown.

Bears quarterback Blake Shapen left in the third quarter of their loss at West Virginia nine days earlier after taking a helmet-to-helmet hit. He was 17-of-26 passing for 164 yards with a touchdown and three turnovers, two interceptions and a fumble.

Shapen's second interception was inside the Jayhawks 5 with only 2 seconds left in the first half. He fumbled in the third quarter when being sacked by defensive end Jereme Robinson, who picked up the ball and returned it 49 yards to set up KU's first touchdown, a 2-yard run by Devin Neal.

The Bears were ranked 17th after a win at Iowa State on Sept. 24, but had since lost 36-25 at home Oklahoma State on Oct. 1, then had an open date before the Thursday night game at West Virginia.

Kansas, which is going into his open date, dropped out of the poll from 19th this week after its back-to-back losses to TCU and Oklahoma.

“It’s definitely gonna be beneficial for us. An extra week of film, an extra week of treatment, not really banging heads every day,” center Mike Novitsky said. "That’ll be good for us ... kind of reset a little bit, get our feet back on the ground and be ready to compete.”

Reese's early 14-yard TD run came two plays after a Kansas fumble caused and recovered by Jackie Marshall. That made it 14-0 less than a minute after Shapen's quick throw to Monaray Baldwin, who caught the ball behind the line and turned that into a 17-yard touchdown on Baylor's first possession.

Baylor drove 99 yards for a touchdown just before halftime after being pinned back by a punt. Receiver Jordan Nabors scored on a 10-yard sweep to make it 28-3 with 42 seconds left in the half. The Bears could have added another score when Skinner fumbled at the Kansas 14, but Shapen threw his second interception right after a drop in the end zone by tight end Ben Sims.

Kansas: The Jayhawks had scored 73 points in their previous two losses, but never really got much going against Baylor. They had just 76 total yards at halftime, and finished with only 288.

“We didn’t get in much of a rhythm,” coach Lance Leipold said.

Baylor: The Bears have won the last 13 games in the series against Kansas, and is 11-0 overall at home in the series. ... Reese has nine rushing touchdowns, eight of them coming while scoring in each of Baylor’s four home games.

Kansas has its open date before hosting No. 11 Oklahoma State on Nov. 5.