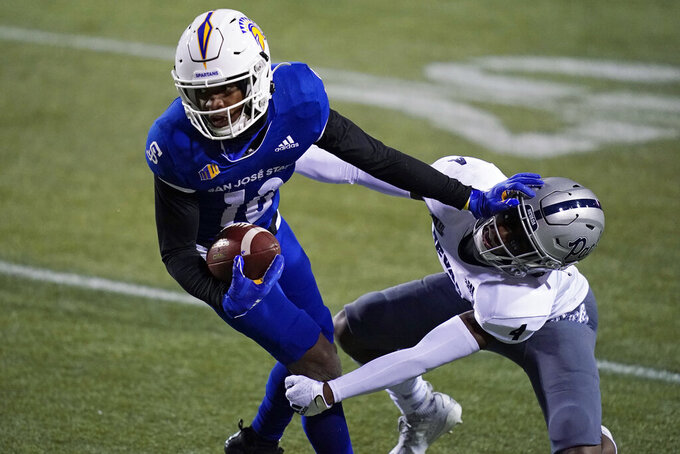 FILE - In this Friday, Dec. 11, 2020 file photo, Nevada defensive back EJ Muhammad (4) tackles San Jose State wide receiver Tre Walker (10) during the second half of an NCAA college football game in Las Vegas. No. 25 San Jose State will face perennial conference powerhouse Boise State in the Mountain West championship on Saturday, Dec. 19, 2020 in Las Vegas. The game is usually played on the higher seed’s home field but this year it will be held at Sam Boyd Stadium. (AP Photo/John Locher, File)

San Jose State is seeking its first Mountain West title in its first appearance in the championship game and its first victory over league powerhouse Boise State. The Spartans have already secured their first winning season since 2012. Boise State is trying to win its fourth Mountain West title game as the Broncos make their fourth-consecutive appearance in the game and fifth overall. They are riding a 14-game conference winning streak.

San Jose State running back Tyler Nevens vs. Boise State defense. Nevens is averaging 8.9 yards per carry. Over his past two games, he has rushed for 336 yards on just 28 carries, including a 69-yard run against Nevada. Boise State’s defense has allowed 183.7 yards rushing per game.

San Jose State quarterback Nick Starkel. Starkel didn't arrive in San Jose until January after spending his first three years of college at Texas A&M and Arkansas. He made up for the lost time and ranks 22nd nationally with a 66.3% completion percentage. He's 106 of 160 on the season for 1,453 yards with 13 TDs against four interceptions.

Boise State quarterback Hank Bachmeier. Bachmeier has had another strong season for the Broncos despite playing in only four games. He has completed 76 of 116 passes for 929 yards with six TDs and only two interceptions.

Boise State’s Avery Williams is the nation’s only player to rank in the top 10 in both punt returns and kickoff returns. ... San Jose State has its first 6-0 start since 1939 and is on a seven-game winning streak. ... The Spartans are ranked for the first time since 2012.