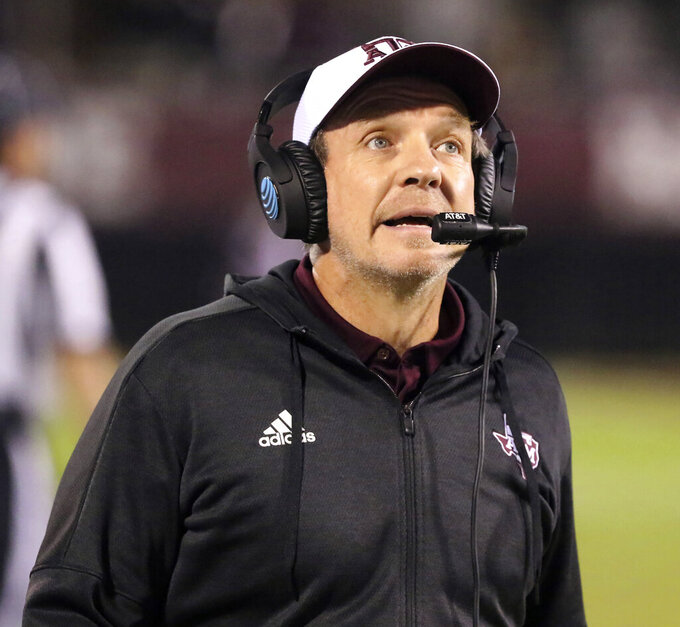 COLLEGE STATION, Texas (AP) — As Jimbo Fisher prepares for his second season at Texas A&M he believes his the Aggies are closer to being an elite team than they were a year ago.

The former Florida State coach knows they still have a ways to go if they expect to contend for a title in the rugged Southeastern Conference.

"We're much, much closer from the psychological disposition of understanding ... what it takes to play at the highest level," he said. "Once you understand that everything else falls in place. It's about what do you know you've got to do and how you've got to do it to the highest level and I think we're getting to that level and that's the biggest difference in our football team."

Texas A&M signed Fisher to a 10-year, $75 million contract before last season and the Aggies went 9-4 and 5-3 in SEC play in his first year in College Station. The expectations are high for Fisher to take another step forward this season after he won a national title and three Atlantic Coast Conference championships in eight seasons with the Seminoles.

That certainly won't be an easy task with a schedule that features a trip to defending national champion Clemson on Sept. 7, a visit by Alabama on Oct. 12 and trips to Georgia and LSU on consecutive Saturdays in November.

While Fisher knows his team will be considered the underdog in most of those contests, he finds it condescending to refer to his team as a spoiler.

"They are great programs, but Texas A&M can be the same way," Fisher continued. "We have to go play and prove ourselves and do the things we have to do, but I definitely think we're on that track."

The Aggies open the season at home Aug. 29 against Texas State.

Fisher and the Aggies are eager to see what quarterback Kellen Mond can do in his third season after starting each game last year. Fisher said Mond, who appeared in 11 games with eight starts as a freshman, has matured exponentially in the year they've worked together. Mond now has such a firm grip of Fisher's offense that he isn't just learning from his coach, but joining in on the discussion and sharing his opinions on how he and his teammates can improve.

"He understands how we're attacking things now," Fisher said. "That's allowing him to transition into putting his personality and demeanor on the other players. It's hard to do that when you're still battling for a job yourself and proving yourself. From that standpoint he's grown tremendously."

That doesn't mean that Fisher is going easy on his 20-year-old quarterback.

"He's always going to continue to push me," Mond said. "That constant pressure ... I might as well get use to and it's going to help me continue to grow."

The Aggies have an opening to start at running back after Trayveon Williams left for the NFL after running for 1,524 yards and 15 touchdowns last season. Though he isn't where Fisher wants him to be yet, sophomore Jashaun Corbin will begin the season as the starter. He had 346 yards rushing with a touchdown last season.

"He still has to prove that and there's things he needs to do to get to that level," Fisher said. "Jashaun's out in front but there's a considerable group of guys behind him that can do a lot of things."

Texas A&M will celebrate the 125th year of football this season. To commemorate the anniversary the Aggies will have special logos on their helmets and the same logos will be placed at the 25-yard lines at Kyle Field and at the entrance of the team's locker room. The celebration also includes a 32-moment bracket of the greatest moments in Aggie football history. Fans can vote on their favorite moment at 12thMan.com and the results will be released near the start of the season. Players involved in the greatest moments will be invited to home games throughout the season to mark the occasion.