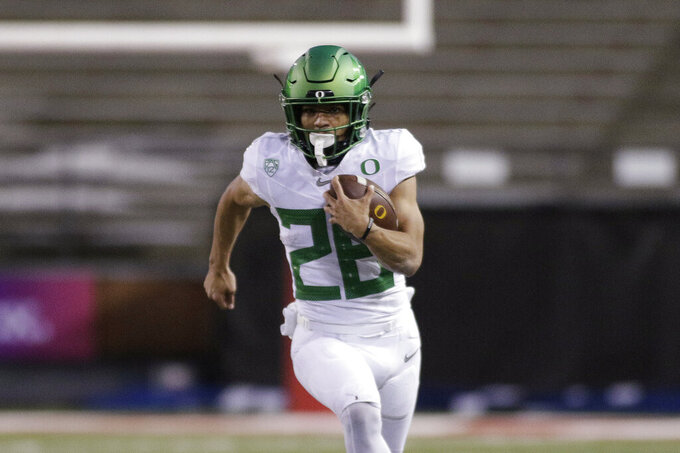 PULLMAN, Wash. (AP) — Running back Travis Dye of No. 11 Oregon recalled the bitter feeling after the Ducks lost at Washington State in 2018, and he didn't plan to experience it again Saturday night.

Dye caught a pair of second-half touchdown passes and Oregon came back to beat Washington State 43-29.

Tyler Shough threw for 312 yards and four touchdowns for Oregon. The Ducks improved to 2-0, piling up 582 yards of total offense.

Freshman Jayden de Laura threw for 321 yards and two touchdowns for Washington State (1-1), which led at halftime but could not stop the Ducks in the second half. Freshman defensive back Ayden Hector recovered three Oregon turnovers in the first half.

``We're looking like a real great offense right now,'' Dye said. ``We are moving and grooving way better than we have in the past.''

Oregon coach Mario Cristobal said the touchdown Oregon scored in the closing seconds of the second quarter was key. It cut Washington State's halftime lead from 12 to five points.

``Certainly a huge momentum swing,'' he said. ``Guys went into the locker room with a lot of juice, a lot of energy.''

Shough played well, especially in the second half, Cristobal said.

``He made some great plays and some great decisions. Great job with protections, used this feet to get out of stuff,'' Cristobal said. ``Just showing tremendous maturity in just a second start, so big days ahead for Tyler.”

``We just started slow,'' Shough said. ``We had those turnovers in the first half and those were crucial to our scoring ability. We just came out in the second half, saying that we're going to take care of the ball and each do our job individually and that showed.''

``We felt they couldn't stop us when we were doing our job, and not turning the ball over,'' Shough said.

Oregon scored 29 points in the second half, and it was the second straight game in which the Cougars have given up a lot of points after halftime.

He did point to the Cougars recovering three straight Oregon turnovers in the first half and only producing 10 points out of those.

``That game should have been different at halftime,'' Rolovich said.

He added that de Laura, a true freshman, played well in only his second college outing.

``He looked comfortable from beginning to end,'' Rolovich said.

Oregon went 92 yards in 15 plays on its first possession, and Shough hit tight end DJ Johnson with a 13-yard scoring pass for a 7-0 lead.

Washington State replied with an 18-yard touchdown pass from de Laura to Lucas Bacon. The Cougars attempted a 2-point conversion but de Laura's pass was incomplete.

Dye fumbled on the next possession and Hector recovered for the Cougars near midfield. De Laura hit Renard Bell with a 44-yard reception and, three plays later, connected with Bell on a 4-yard touchdown pass for a 13-7 lead.

Hector intercepted Shough's pass on Oregon's next possession but the Cougars had to punt.

Oregon's CJ Verdell was stripped of the ball on their next possession and Hector pounced on the fumble for his third recovery. But the Cougars had to settle for Blake Mazza's 39-yard field goal.

Oregon was not done. Shough completed a 57-yard pass to Jaylon Redd to the Oregon 3, and Verdell ran in for the touchdown to cut Washington State's halftime lead to 19-14.

``That took an emotional toll,'' Rolovich said. ``I stress being the last one to score before halftime.''

The Ducks shut down Washington State's offense in the third quarter, holding the Cougars to 30 yards.

Meanwhile, Shough threw a 16-yard touchdown pass to Dye late in the third to lift the Ducks to a 21-19 lead. He added a short touchdown pass to Johnny Johnson in the opening seconds of the fourth to push the lead of 28-19.

Washington State put together a drive to Oregon's 8, but had to settle for a 25-yard field goal by Mazza to cut Oregon's lead to 28-22.

Oregon replied immediately as Shough fired a 71-yard scoring pass to Dye, and then ran in the conversion, to lift Oregon to a 36-22 lead with just over 8 minutes left.

CJ Verdell led Oregon with 118 rushing yards, while Shough ran for 81 yards. The Ducks totaled 269 rushing yards in the game.

Oregon: The Ducks have won 17 of their past 19 games, and are on track to claim a second consecutive Pac-12 championship. They overcame three consecutive turnovers in the first half to win their first game in Pullman since 2014.

Washington State: The game marked the home opener for Rolovich. The Cougars were picked to finish last in the Pac-12 North, but have looked better than that in their two games so far.

Oregon may break into the Top 10.

Washington State: At Stanford on Saturday.