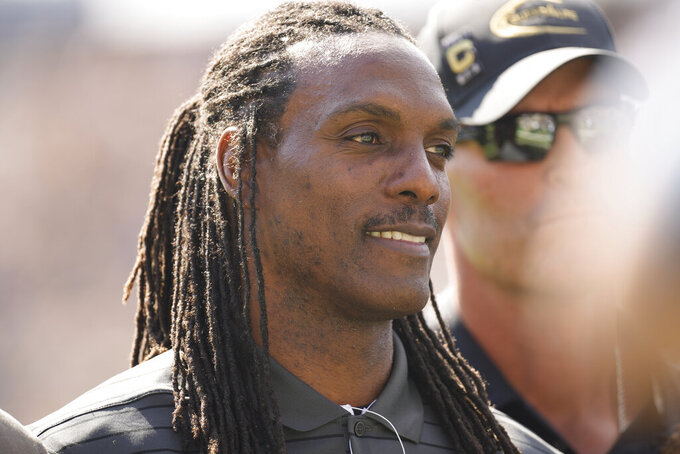 Former Colorado and NFL wide receiver Michael Westbrook smiles as he is honored in the first half of an NCAA college football game against Southern California Saturday, Oct. 2, 2021, in Boulder, Colo. (AP Photo/David Zalubowski) 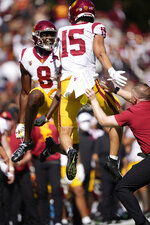 London caught nine passes for 130 yards and a touchdown in Southern Cal's 37-14 rout at Folsom Field on Saturday. Included in his highlight reel performance were several jaw-dropping receptions that left the Buffaloes and the crowd of nearly 50,000 awestruck.

“We knew No. 15 was going to be a threat,” Colorado safety Isaiah Lewis said. “And he was still making plays regardless of how tight our coverage was. So, respect to him.”

The 6-foot-5 junior receiver made play after play that reminded Colorado coach Karl Dorrell of Michael Westbrook, who starred for the Buffs in the 1990s and who was honored in the first half in recognition of his induction into the College Football Hall of Fame.

Shown on the scoreboard was the “Miracle at Michigan" in 1994 when Westbrook caught Kordell Stewart’s 64-yard TD pass as time expired.

“Yes, it was reminiscent in a way of what we used to have here” in Westbrook, Dorrell said. “He is a good player. He's very competitive. It doesn't matter if someone's hanging on him. He has great focus and concentration. He's already got strength and size, plus a 40-inch vertical. That's almost impossible to cover.”

London's 31-yard grab set up the first of Parker Lewis’s three field goals to start the scoring and he had receptions of 29 and 28 yards on USC’s next drive, which culminated with his one-handed touchdown grab from the 1.

“That’s Kedon putting the ball in the right place,” London said of quarterback Kedon Slovis. “He’s such an accurate quarterback.”

London's such a big, sure-handed target.

“I expect him to do that,” Trojans interim coach Donte Williams said. “So when the ball’s in the air and if he’s around with 10 other people we expect him to come down with the ball.”

Slovis also threw TD passes to Michael Trigg and Gary Bryant Jr. and completed 19 of 29 throws for 276 yards as the Trojans bounced back in a big way from their first home loss to Oregon State in 61 years by rolling over a Buffaloes team whose offense remains stuck in neutral.

The Buffaloes (1-4, 0-2) fell to 0-15 against Southern Cal with their fourth consecutive loss since a win in their opener over lower-division Northern Colorado.

Brendon Lewis was held to 10-of-17 passing for 162 yards, was intercepted once and sacked five times. The Buffs converted just 1 of 10 third downs and failed on a fourth-down try.

“It wasn't just about Brendon,” Dorrell said, blaming the protection up front and even the usually stalwart defense, suggesting the only bright spot for the Buffs was his punter, Josh Watts.

The Trojans gained just 2 yards on the game's opening possession but they made up for it by scoring on their next four drives to build a 20-0 cushion.

A fumble at midfield by USC running back Keaontray Ingram gave the Buffs a big break just before halftime. Safety Mark Perry pounced on the loose ball at the Trojans 48, and that gave Colorado's sputtering offense its first foray in USC territory.

Seven plays later, Deion Smith scored from a yard out to pull the Buffs to 20-7 at halftime.

The Buffs got the second-half kickoff with hopes of making it a one-score game, but they turned it over on their first two drives, once on a fumble and another time on downs, and the Trojans capitalized by expanding their lead to 30-7.

USC defensive tackle Tuli Tuipulotu strip sacked Lewis on the opening drive of the second half. The ball popped into the arms of linebacker Drake Jackson at the Colorado 29, setting up a field goal.

Tuipulotu's sack came three plays after Trojans linebacker Ralen Goforth was disqualified for targeting after his helmet-to-helmet hit of a sliding Lewis.

USC: The Trojans got a reprieve from the drama surrounding the program following Clay Helton’s firing on Sept. 13 and the Trojans' first home loss to Oregon State since 1960. They dominated the Buffs. “That’s what we should do,” Williams said, “that’s what we expect to do.”

Colorado: The offensive struggles continued for the young Buffs, who still couldn't find any rhythm against an opponent that was scuffling just about as much as they were. Their last five losses to USC had come by a total of 36 points, including three by four points or less. This one was never close.

Colorado: Gets next weekend off before hosting Arizona on Oct. 16 and the Buffs welcome the bye week: “There's so many things we need to fix right now,” Dorrell said.