Stanford wraps up down season against No. 15 Notre Dame 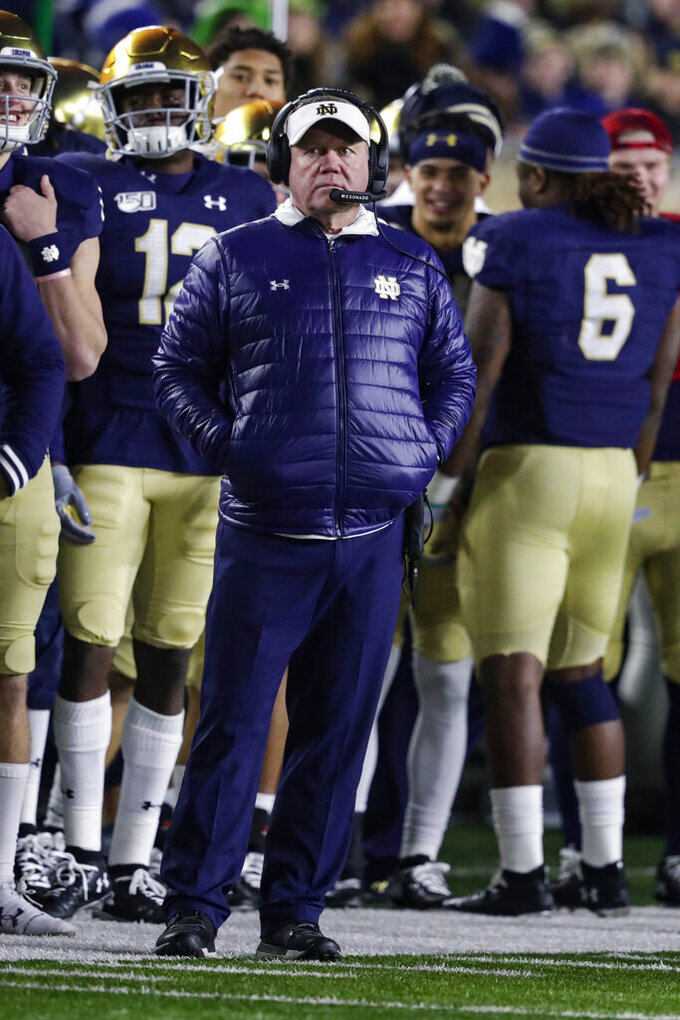 STANFORD, Calif. (AP) — When Stanford’s nine-game winning streak in the Big Game ended with a loss to California, the Cardinal's bowl hopes died as well.

For the first time since coach Jim Harbaugh's first season on The Farm in 2007, the Cardinal will play a game with no chance at making a bowl when they host No. 15 Notre Dame on Saturday.

"It's going to be a test of our character," linebacker Curtis Robinson said. "It will be real easy for anyone off the street to just quit because we don't have a bowl game or, you know what I'm saying, we're not having a great season. Anybody can do that. So I think that it's going to be a test of our character. If we come out and we show that we prepared like we would any other game, with the motivations of any other game, I think that will be a good sign for the program. And I don't expect anything less from our team."

Stanford (4-7) has been one of the country's most successful programs this decade, winning 98 games and playing in three Rose Bowls and two other BCS games. This season started with high hopes and a No. 25 ranking but a series of injuries and a pair of three-game losing streaks, the Cardinal are having their worst season in more than a decade.

They last missed a bowl in 2008 when they lost their final three games to finish 5-7 in Harbaugh's second season. They went 4-8 the previous year but even that provided optimism with an historic upset over No. 2 Southern California, a win in the Big Game and vast improvement over a one-win season the previous year.

“If we just want to tap out and get ready in the offseason, try to come back next year strong, it's going to show poor character," tight end Colby Parkinson said. "But that's not what we have here. We have a group of guys that are all strong and willing to fight. And that's what we're going to do."

There's probably not a lot at stake for the Irish, either. They have only a remote chance of making a New Year's Six bowl but are still hoping to match a school record with three straight 10-win seasons.

"I'd say that's a pretty high bar," coach Brian Kelly said. "To win 10 out of 12 games each year, given the kind of schedule that we play, if you had that stock, you'd probably be pretty happy."

The Irish have responded well since losing 45-14 at Michigan last month. They followed that with a one-point win over Virginia Tech and then three straight victories by at least 30 points against Duke, Navy and Boston College.

"Everyone just believes in each other and never gave up," quarterback Ian Book said. "Our freshman year, to go 4-8 and have three great seasons after that, this group doesn't give up. This group never gives up, it works hard and is confident.

With K.J. Costello still injured, Davis Mills will remain the starting quarterback for Stanford. Mills has played well since returning from his own injury two weeks ago. He set a school record with 504 yards passing in a loss at Washington State and then went 26 for 35 for 283 yards last week in the loss to Cal.

Notre Dame has held the opposition to 3.5 yards a carry the past four games after being gashed on the ground by Michigan. The Irish handled Navy's option attack well and then held Boston College star back A.J. Dillon to only 56 yards.

Stanford’s nine-game winning streak in the Big Game was stopped last week, but The Cardinal have has a couple of notable streaks on the line against Notre Dame. They have won their last five at home against Irish and have won 22 straight nonconference home games since losing to Notre Dame in 2007, including all 17 under coach David Shaw.

By Ralph D. Russo 21 minutes ago
an hour ago
By Brett Martel 2 hrs ago
2 hrs ago
By Bernie Wilson 3 hrs ago