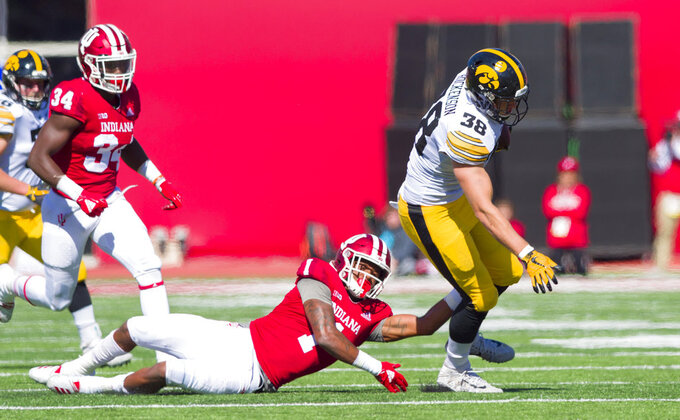 Indiana defensive back Juwan Burgess (1) tries to tackle Iowa tight end T.J. Hockenson (38) as he rushes the ball up field during the second half of an NCAA college football game Saturday, Oct. 13, 2018, in Bloomington, Ind. Iowa won 42-16. (AP Photo/Doug McSchooler) 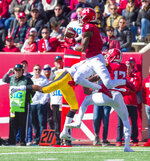 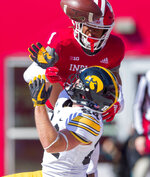 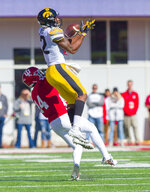 After the Hawkeyes 42-16 win over Indiana on Saturday, neither will Hoosier fans.

Stanley torched the Indiana secondary through the air, passing for 320 yards and tying an Iowa record for the second-most touchdown passes in a single game in school history with six. Stanley connected with nine different wide receivers in a game where he was only sacked one time.

The Hawkeyes' 479 yards of total offense marked the fourth straight game they have surpassed 400 yards.

"Whatever's working in the game plan, that's what the coaches are going to continue to do," Stanley said. "Whatever play is called we're going to just go out there and execute it to the best of our ability. When everybody is doing what they're supposed to do you can get a lot better pretty quickly."

Indiana's opening drive looked promising, as the Hoosiers took the ball deep into Hawkeye territory, but the Iowa defense doubled down in the red zone and held the Hoosiers to a field goal, setting the tone for what would become an abysmal day on offense for Indiana. On the ensuing drive, Stanley threw an interception, but a pass interference call negated the turnover, setting up a 9-yard touchdown pass to T.J. Hockenson.

Stanley relied on his tight ends heavily, connecting with Noah Fant and Hockenson for eight of his 21 completions. The two tight ends accounted for 208 of Stanley's 320 passing yards, with Fant finishing the game with 101 yards and Hockenson totaling 107 yards. Saturday marked the second time in his career that Hockenson finished the game with two touchdowns and 100 receiving yards.

"(Indiana) was playing a lot of man coverage in some situations where a tight end was locked down by somebody," Stanley said. "The ability that Noah and T.J. have at the top of their routes allows them to get a lot of separation and catch and run with the football."

Iowa's offense was too much for the Hoosiers thanks to the Hawkeyes' passing attack. The Hawkeyes went into the half with a 21-10 lead and never looked back, spoiling Indiana's homecoming weekend. Iowa was able to balance out its offensive onslaught with a solid rushing attack as well. Toren Young joined in on the action, rushing for a career-high 96 yards. Young also caught an 11-yard TD pass.

The Hoosiers managed to make it interesting for a brief period during the second quarter. Indiana was trailing 14-3 when Stanley made his only mistake of the day, an errant pass right in the direction of Hoosiers defender Thomas Allen, who set Indiana up in Iowa territory following his interception. On the next play, Indiana quarterback Peyton Ramsey found Ty Fryfogle in the end zone for a 33-yard touchdown that made it a 14-10. Ramsey finished with one touchdown and two interceptions, completing 31 of 42 pass attempts for 263 yards.

"The big tight ends were tough for us to match up with," Indiana coach Tom Allen said. "On this day they were the better team. I'm disappointed in the way we performed. It's on me to get the team ready, it's my responsibility. We just weren't good enough today."

Iowa: Indiana hangs its hat on the abilities of its defense, but on Saturday the Hawkeyes offense looked phenomenal and, for nearly the entire game, unstoppable. Iowa finished with 479 yards of offense against an Indiana team that was allowing about 370 per game. The Hawkeyes will become bowl eligible with a win next Saturday

Indiana: The Hoosiers will have their work cut out for them during the second half of the season. Indiana needs two more wins to become bowl eligible. Indiana's remaining six games features contests against No.8 Penn State and No.12 Michigan.

Noah Fant's 18 career touchdowns at Iowa is fourth all-time in program history. With Nate Stanley under center, Fant will see plenty passes his way. Seventeen of Fant's 18 touchdowns have come from Stanley.

Iowa has won five of its first six games for the eighth time in Kirk Ferentz's 20 seasons as the head coach. Since the start of the 2017 season, Iowa is 11-0 when scoring 20 or more points. Iowa has now won seven of the last eight meetings against Indiana

Iowa: The Hawkeyes return to home and will host Maryland

Indiana: The Hoosiers stay at home for a second consecutive week and will welcome Penn State