STAT WATCH: Huskers' 9 single-digit Ls most in FBS since '78 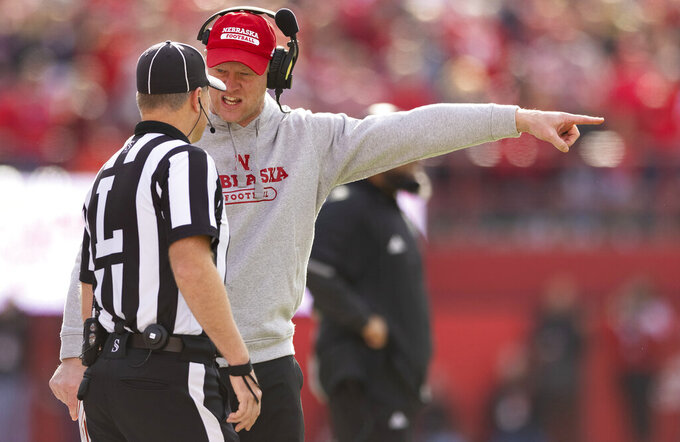 Nebraska head coach Scott Frost argues for officials to review and overturn a touchdown reception called for Iowa during the first half of an NCAA college football game Friday, Nov. 26, 2021, at Memorial Stadium in Lincoln, Neb. Following review, the call was reversed and the pass was declared incomplete. (AP Photo/Rebecca S. Gratz)

Nebraska has earned the dubious distinction of being the best 3-9 team in the country.

Here's why, according to Sportradar: Since 1978, when Division I football was split into what is now known as the Bowl Subdivision and Championship Subdivision, no team until the 2021 Cornhuskers had nine single-digit losses in a season.

Eight of the nine were one-score games (eight points or less), and the other was a nine-point loss to a top-10 Ohio State. Nebraska played five other ranked opponents and lost all of those by an average of 5.4 points.

The Huskers' went 1-8 in Big Ten play, but their point differential was a wash. They scored 239 points and gave up 239 in league games. Accounting for that oddity was their 56-7 win over Northwestern.

Scott Frost is 15-29 in four seasons (.341) and will be brought back next year under a restructured contract. Bill Jennings, who coached the 1957 team that was the only other one in program history to lose nine games, is the only Nebraska coach with a worse winning percentage than Frost through four years (12-28-1, .305).

Georgia has allowed just 83 points entering the Southeastern Conference championship game against Alabama. Since 2000, the only other team to give up under 100 points over its first 12 games was Southern California (93) in 2008.

The Bulldogs are the first team since Texas in 1979 to hold its opponents to 17 points or less in each of its first 12 games of the season, according to ESPN.

Michigan's win over Ohio State not only stopped the Buckeyes' win streak in the series, but also several other impressive marks.

Under Ryan Day, the Buckeyes had won 25 straight against Big Ten opponents (23 regular season, two conference championship games). They had won 26 consecutive Big Ten regular-season games dating to the Urban Meyer era, the second-longest streak in league history. They also had won 21 straight against ranked Big Ten opponents and 12 in a row in true road games against all Top 25 foes.

Missouri's Tyler Badie is the first player since Wisconsin's Jonathan Taylor in 2018 to record five 200-yard rushing games in a season.

Badie's latest was against Arkansas on Saturday, when he carried 41 times for 219 yards.

There have been 44 individual 200-yard rushing games this season.

Central Michigan's Lew Nichols III finished the regular season as the nation's top rusher in yards per game (142.5) and total (1,710). He also is first in attempts (311) after running 44 and 43 times the last two games — the most in back-to-back games since Alabama's Derrick Henry carried 46 and 44 times over two weeks in 2015.