STAT WATCH: Midshipmen's ground game not what it used to be 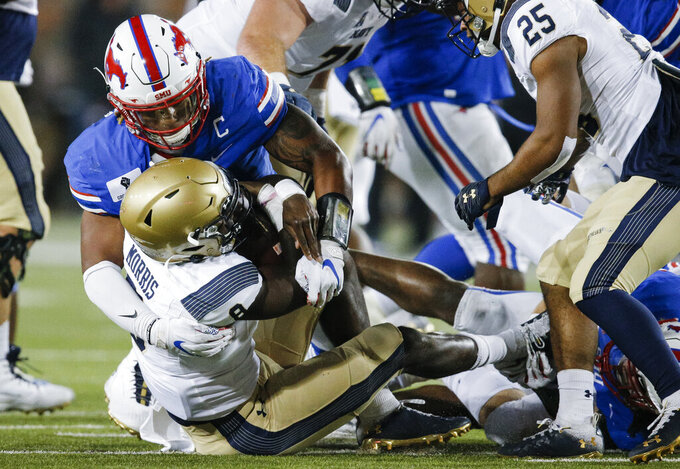 Navy’s triple-option offense is sputtering for the first time in a long time.

The Midshipmen enter November ranked 32nd nationally in rushing with an average of 187 yards per game. That’s a stunning development for a program that led the nation in rushing in 2019 and five other seasons since 2002. In fact, the Midshipmen have never finished lower than sixth the last 18 years.

SMU held a 255-191 rushing advantage in its 51-37 victory Saturday, marking the first time since 1998 the Mustangs outrushed Navy and the fourth time in seven games this season that the Midshipmen had been outgained on the ground.

Navy’s 30 pass attempts against SMU were its most since 2016 and only the second time since 2001 that it has thrown that much.

TIME BEHIND THE LINE

Virginia’s Charles Snowden and Texas’ Joseph Ossai spent a considerable amount of time behind their opponents’ line of scrimmage.

Snowden recorded a national season-high four sacks against North Carolina. Ossai had six tackles for losses against Oklahoma State, the most TFLs since 2017.

East Carolina's Tyler Snead caught 16 passes in a 34-30 loss at Tulsa, most in the nation since he hauled in 19 passes against SMU last year.

The 5-foot-7, 169-pound sophomore finished with 108 receiving yards for his fifth career 100-yard game. His 36 catches for the season rank third in the American Athletic Conference.

Minnesota's Mohamed Ibrahim carried the ball 41 times in a 45-44 overtime loss at Maryland. That was the most attempts by a Gophers player since Laurence Maroney ran 43 times against Wisconsin in 2005 and most nationally since Air Force's Isaiah Sanders had 44 attempts against Utah State in 2017.

Ibrahim finished with 207 yards. Maryland's Jake Funk had a game-high 221 yards on 21 carries. Those were the only 200-yard games of the week.

The Sooners led Tech 21-7 after the first quarter and have outscored opponents 89-10 in the first 15 minutes this season.

Virginia, in beating then-No. 15 North Carolina 44-41, scored its most points against a Top 25 opponent since beating West Virginia 48-22 in the 2002 Continental Tire Bowl.