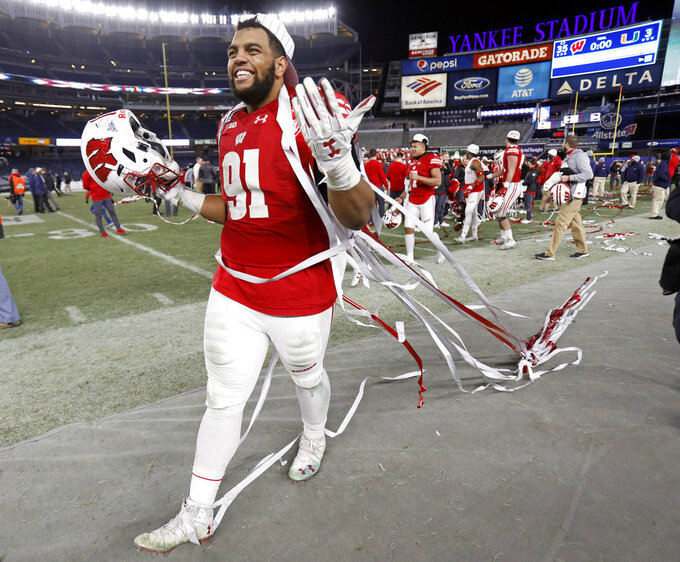 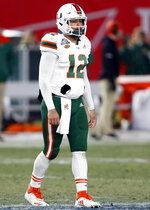 NEW YORK (AP) — Jonathan Taylor played tour guide for his Wisconsin teammates who had never visited New York. They hit the usual landmarks with trips to Lincoln Center and Times Square. Taylor even gave his buds a taste of the luxe life with a window-shopping jaunt along Fifth Avenue.

"It's real fun to see those guys looking at all those sights," said Taylor, a New Jersey native. "New York has a lot to offer."

Taylor gave the Badgers one more dazzling sight to see, and the nation's leading rusher heads home with his own sweet souvenir — an MVP trophy.

Taylor ran for 205 yards and a touchdown and topped the 2,000-yard season mark to help Wisconsin rout Miami 35-3 in a chilly Pinstripe Bowl on Thursday night.

"We've got the best back in the country," Wisconsin coach Paul Chryst said after he accepted the Pinstripe trophy from Yankees owner Hal Steinbrenner.

There are few in football who would argue that point. Taylor, just a sophomore, ripped off runs of 39 and 41 yards at Yankee Stadium and combined with a defense that forced five turnovers to help a Wisconsin (8-5) team ranked fourth in the first AP Top 25 poll salvage its fifth straight bowl victory. The loss had to seem like a rerun for Miami: Taylor ran for 130 yards in Wisconsin's 34-24 win over the Hurricanes last season in the Orange Bowl.

"Definitely playing them last year, it helped out a lot," Taylor said.

Taylor, who finished with 2,194 yards rushing and 16 TDs, has been a bright spot for a team that failed to come close to lofty expectations.

Both teams were ranked inside the top 15 last December. A year later, Wisconsin and Miami (7-6) both showed at times why two teams that opened the season inside the top 10 were stuck playing in a ho-hum bowl game with temperatures in the 30s and a sparse crowd in the Bronx. Miami's Malik Rosier threw three interceptions before he was replaced late in the third quarter; Wisconsin's Rafael Gaglianone whiffed on two field goals.

The Badgers, certainly used to the cold, came out swinging for the fences — they scored two touchdowns just 3 1/2 minutes into the game and seemingly knocked the will out of Miami. Jack Coan made the most of his start for injured Alex Hornibrook (concussion) and hit Kendric Taylor for a 35-yard TD on the first drive. Rosier's first pass of the game was intercepted and Taylor capitalized with a 7-yard score to make it 14-0.

Coan is a Long Island native and needed nearly 50 tickets for friends and family. He ran right for a 7-yard touchdown in the fourth for a 28-3 lead that made it worth the trip for the thousands of fans in red — an unseemly sight in June at Yankee Stadium — that stuck it out to the end. Coan made his fifth appearance this season and burned his eligibility to take a redshirt year.

It sure seemed worth it for Wisconsin.

Coan was the home state star but Taylor put a final exclamation point on a season that made one of college football's top stars.

Taylor had 117 yards rushing at halftime and finished with his fifth 200-yard game this season, not bad for a running back that averaged 165.8 yards per game. He joined Ron Dayne and Melvin Gordon as Wisconsin's 2,000-yard rushers.

"The thing I've appreciated as much as anything is how he's done it, the way that he works, the teammate that he is," Chryst said.

Rosier got the start over N'Kosi Perry, who had a rocky season and faced heat for two questionable Snapchat posts, in a move that was quickly second-guessed. His third interception of the game was turned into Alex Ingold's 2-yard touchdown and a 21-3 lead. Perry eventually checked into the game — but Taylor and Coan had long turned this one into a rout and the Hurricanes offense again was a sore spot (169 total yards).

"Things have got to get fixed," coach Mark Richt said. "That will be the No. 1 priority".

Miami defensive coordinator Manny Diaz's final game before he leaves for Temple was a dud. The Badgers had 406 total yards.

Wisconsin needs to put a better team around Taylor to become a threat in the Big 10.

Miami: Is Perry the answer at QB? Jarren Williams, who flirted with transferring, should push Perry for the No. 1 spot and both will try and win the job in training camp. Richt said Williams has "an outstanding shot" at competing for the job.

Wisconsin: Taylor returns for his junior season as a strong contender for the Heisman Trophy and will try and keep the Badgers in the College Football Playoff race.