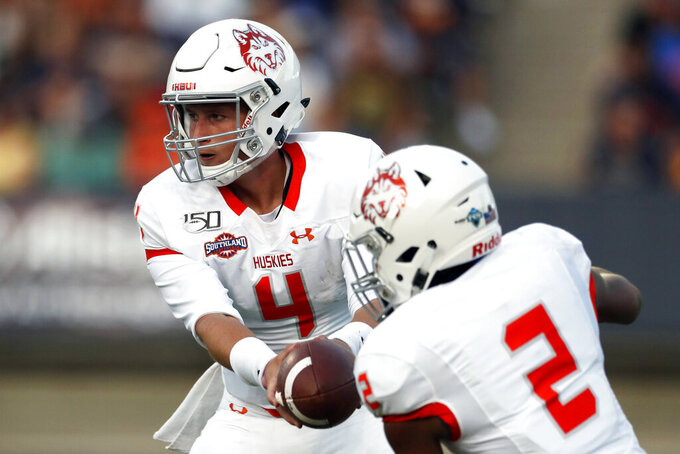 FILE - In this Aug. 31, 2019, file photo, Houston Baptist running back Ean Beek (2) takes a hand-off from quarterback Bailey Zappe (4) during the first half of an NCAA football game against UTEP in El Paso, Texas. Houston Baptist still had three games scheduled for its eighth football season when its FCS Southland Conference decided only a few weeks ago to not play league games this fall. Even with expanded protocols and more costly virus testing, the Huskies are moving forward with their remaining games. (AP Photo/Andres Leighton, File)

Houston Baptist still had three games scheduled for only its eighth football season when the FCS Southland Conference decided a few weeks ago to not play league games this fall.

Then came the expanded protocols and increased costly testing necessary to play upper-division schools during a pandemic.

“You begin to think, ‘Is any of this worth it?’" HBU athletic director Steve Moniaci said.

It was for the Huskies, who kicked off their season Saturday night at North Texas.

With senior standouts returning at all the offensive skill positions after a school-record five wins last season, the games get players who Moniaci said “obviously want to compete” on the field in September before an expected spring conference schedule. And the school fulfills contractual obligations for games at Texas Tech of the Big 12 and Conference USA teams North Texas and Louisiana Tech.

“It is about the health and well-being of our student-athletes, and everybody else associated with the program. ... You balance the risk-reward of the whole thing, and I still think we're doing the right thing by playing," Moniaci said, leading up to the game. “But I'm not going to feel comfortable about any of it until we're done playing all these games."

Houston Baptist had a 300-mile bus ride to Denton, Texas, for the season opener. Everyone wore masks, like they had through fall practices, from the time they gathered to load onto the buses Friday until getting into their hotel rooms.

The Huskies have about 100 players and staff on the trip, and all went through COVID-19 testing three times this week — each individual test costs the private school about $80. The Southland Conference would require only once-a-week testing, but the Huskies have to follow the rules of their opponents' conferences.

C-USA, like the Power Five leagues in its footprint (ACC, Big 12 and SEC), opted to keep its original conference schedule and allow up to four nonconference games. North Texas currently has 11 games. The opener against Houston Baptist was set a couple of years ago, but the Mean Green lost a lucrative trip to Texas A&M when the SEC went to a conference-only slate.

“There's a lot of apprehension and worry in the back of your mind, yet excitement. So it's a lot of different emotions, and certainly more running the gamut than in a normal year," North Texas athletic director Wren Baker said. “I haven't talked one time, or worried one time, will we win enough games this year. With so much going on, it kind of feels like just having a season is going to be a success.”

The capacity was capped at about 25% for the opener at UNT's 30,000-seat stadium. Fans, including small groups like family members attending together, were in assigned seats with appropriate spacing between others. Those in suites had to remain in their assigned locations and were not allowed to visit other suites as many would in the past.

There were additional signs and social-distancing markers throughout the stadium. Concessions were available but were ordered through an app before a contact-less pickup.

Mean Green coach Seth Littrell said there were plenty of ups and downs throughout the summer when it was unclear if there would be a fall season — or any games at all. He described it as an “emotional process” that his players handled with maturity.

Vic Shealy, the only coach Houston Baptist has had since starting play in 2013, said his team got 11 days of spring football practice completed before COVID-19 shut down sports in mid-March. But then there was a period when the team “just lost structure” of the regimen of the offseason program, including strength and conditioning, before players got back to campus in July.

“Even though the guys know the drill, it seemed like it just emotionally and physically wore them down faster,” Shealy said. “We didn't have them as long as you'd like to have them just to kind of get them back in that mindset. ... Going into this game, we're not where you would like to be in terms of just that mental strength to handle the duration of four quarters.”

Shealy said he also saw an increase in the number of soft-tissue injures that kept players off the field for several days at a time. That kept some players from making the trip to UNT for the first game.

“I've never seen it like this before," said Shealy, a college coach for nearly four decades. “And it goes back just to not really having quite that long window of offseason work prior to coming in.”