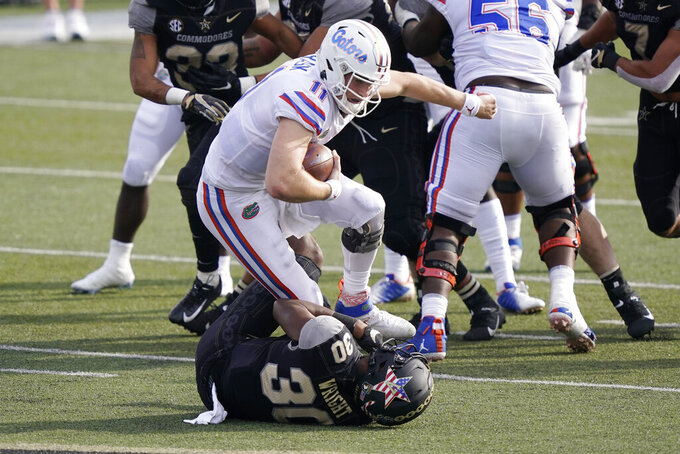 Florida quarterback Kyle Trask (11) is brought down by Vanderbilt'a De'Rickey Wright (30) in the second half of an NCAA college football game Saturday, Nov. 21, 2020, in Nashville, Tenn. (AP Photo/Mark Humphrey)

NASHVILLE, Tenn. (AP) — Florida quarterback Kyle Trask is all about winning — and not so much about awards and records.

Trask passed for 383 yards and three touchdowns, and No. 6 Florida rallied from an early deficit to beat Vanderbilt 38-17 on Saturday.

Trask, a Heisman Trophy hopeful, completed 26 of 35 passes to nine different receivers. He is the first quarterback in SEC history to accrue 30 touchdown passes in seven games.

“We knew they were going to be playing a lot of drop eight zones and we were going to have to find open windows and try to pick them apart,” Trask said. “I think I did a decent job of just being on the same page with my guys.

“At the end of the day, I know there’s a lot of politics and things that go into all those individual awards. That’s why I don’t really get into all that. I’m just concerned about winning.”

The Gators (6-1, 6-1 Southeastern Conference) pulled into Vanderbilt Stadium an hour before kickoff already in uniform, hoping to avoid the visitors locker room as a coronavirus precaution. The Commodores (0-7, 0-7) opened the game by driving for a touchdown, but Trask helped get Florida on track for its seventh consecutive win in the series.

Florida coach Dan Mullen classified the win as “a ho-hum performance," and cornerback Kaiir Elam agreed with his coach’s view.

“It was good that we closed them out. … I think they scored way too many points today, honestly,” Elam said.

Vanderbilt drove 75 yards on 11 plays in the opening series, scoring on Ken Seals’ 16-yard pass to Chris Pierce Jr. with 10:50 left in the first quarter.

The Gators tied it less than three minutes later on a 27-yard score from Trask to Kadarius Toney.

Vanderbilt countered with Pierson Cooke’s 25-yard field goal on the next drive, and the Gators tied it at 10 when Evan McPherson kicked a 33-yarder at 4:13 of the second quarter.

Trask threw a 34-yard TD pass to Trevon Grimes with 49 seconds left until halftime for a 17-10 lead, and Dameon Price rushed in from a yard out for a 24-10 advantage early in the second half.

With 2:55 left in the third, Trask found tight end Kemore Gamble in the back of the end zone for a 2-yard touchdown pass.

“Kyle went 26 of 35 for 383 and three touchdowns with no interceptions against a team that was 100% stop the pass first today,” Mullen said. “That’s a pretty darn good performance against that type of look.”

Vanderbilt answered 54 seconds later with a 58-yard pass from Seals to Pierce, who caught the ball around the Florida 45-yard line and eluded two tackle attempts on his way to the end zone. It was the longest touchdown catch for Pierce in his career, and the longest TD throw for Seals.

“There wasn’t much to it,” Pierce said. “I knew the offense needed some motivation. I took it in my hands to be that person.”

Florida struck again at 6:46 of the fourth quarter with backup Emory Jones completing a 30-yard pass to Gamble, his second catch of the game.

Seals set a Vanderbilt record for passing yards by a freshman, besting the 1,483 yards thrown by John Gromos in 1985. He completed 22 of 34 passes for 319 yards, his fourth straight game with 200 or more yards and his third in the last four with more than 250. It was the third time this season he has passed for at least 300 yards.

Vanderbilt coach Derek Mason saw a bright spot in the way his team opened the game on both sides of the ball as slow starts have plagued the Commodores all season.

“Part of our game plan was to attack early on both sides and we did that,” Mason said. “I think that is the way we can win.

“It was a question of how do we attack this Florida team? When they walked we had to run. We had some opportunities and we just missed those.”

Family and friends of players and a few Vanderbilt graduate and professional students attended the game. Vanderbilt made 500 tickets available for family members of Florida players. Vanderbilt’s band, flag corps and cheerleaders were in the stands on the visiting team side of the field.

Florida: The Gators usually arrive two hours before kickoff but chose to show late Saturday, and players never entered the dressing room, even at halftime. Mullen said the small locker room at Texas A&M may have contributed to a COVID-19 outbreak on his roster, and he wanted to avoid the tiny visitors room at Vanderbilt Stadium. He said he didn’t think the unusual pregame contributed to Florida’s slow start.

Vanderbilt: Chris Pierce Jr. has touchdown catches in his last four games, the first time for the Commodores since Chris Boyd accomplished the feat from Oct. 27 to Nov. 17 of 2012. He became the first Commodore since Jared Pinckney to catch two touchdown passes in a game. Pinckney snared two again East Tennessee State Nov. 23, 2019. The last Commodore with two touchdown passes in an SEC game was Kalija Lipscomb against Ole Miss on Nov. 17, 2018.

While it wasn’t the dominant victory anticipated by the Gators, the win is a key to a move up the polls. Texas A&M, ranked No. 5, did not play this week.