Unbeaten No. 6 Cincinnati to face No. 11 Georgia in Peach 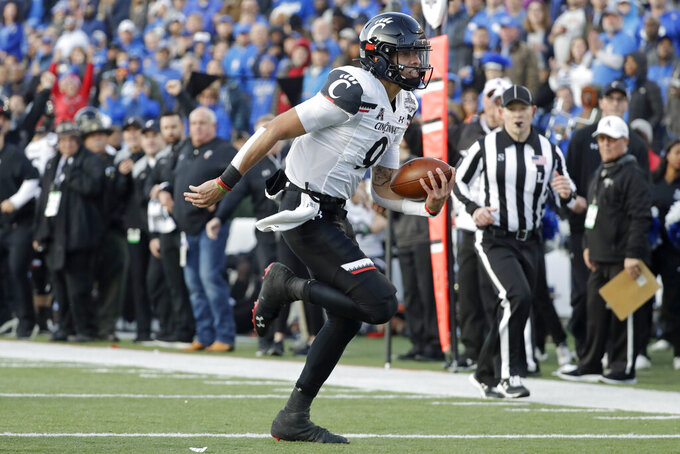 American Athletic Conference champion Cincinnati is trying to complete its first undefeated season of the modern era and make an argument it deserved stronger consideration for a spot in the College Football Playoff. The Bearcats also are looking for a New Year’s Day bowl win after losses to Virginia Tech and Florida in the 2009 Orange Bowl and 2008 Sugar Bowl, respectively. Georgia is trying to close with four straight wins since naming JT Daniels its starting quarterback. The Bulldogs are trying to build momentum for 2021 after their streak of three straight Southeastern Conference Eastern Division titles was snapped this season.

Georgia QB Daniels vs. Cincinnati secondary. Daniels passed for nine touchdowns with one interception in his three starts. Kearis Jackson and George Pickens are the Bulldogs’ top receivers. The Bearcats are tied for fifth in the nation with 15 interceptions and have forced a turnover in 19 consecutive games, the longest active streak among FBS teams. The secondary is led by cornerback Ahmad Gardner and safety James Wiggins, who were second-team AP All-America selections. Cincinnati allowed 16 points per game to rank seventh in the nation.

Cincinnati: RB Gerrid Doaks and QB Desmond Ridder combined for 19 rushing touchdowns and almost 1,300 yards. Ridder passed for 2,090 yards with 17 touchdowns and six interceptions. He was named AAC offensive player of the year and is a Manning Award finalist. LB Jarell White, a first-team, all-AAC selection, led the Bearcats with 74 tackles and had two interceptions and two sacks.

Georgia won at Cincinnati in 1942 and at home in 1976 in the only previous meetings between the teams. ... Cincinnati’s last undefeated season was a 3-0 record in 1918. ... The Bearcats are 2-0 in bowl games with coach Luke Fickell with wins over Virginia Tech in the 2018 Military Bowl and over Boston College in the 2019 Birmingham Bowl. ... Georgia is playing in a bowl for the 24th consecutive season, the nation’s longest active streak. ... Overall, this is the Bulldogs’ 57th bowl, including six in the Peach Bowl. ... Georgia RB James Cook will miss the game following his father's death. Cook is the team's second-leading rusher and fourth-leading receiver. ... Cincinnati is the first undefeated team Georgia has played in a bowl game since beating 12-0 Hawaii 41-10 in the 2008 Sugar Bowl. ... Georgia's seniors are 43-9 and can tie the 2005 and 2019 classes with 44 wins. ... Georgia has averaged 41.7 points and 498.3 yards in three games with Daniels.