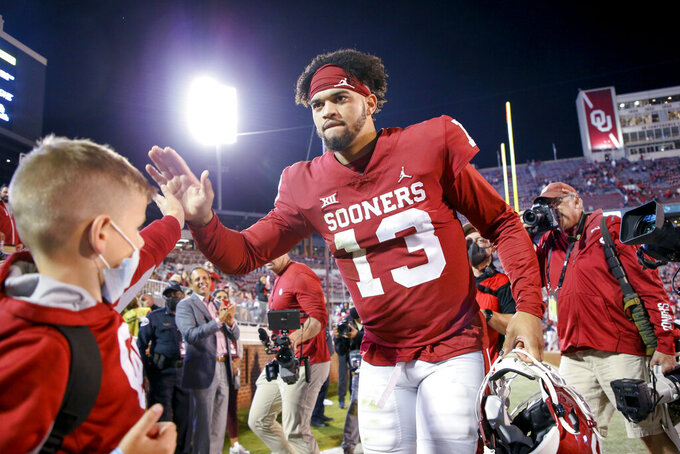 Southern California's new coach had to wait patiently and stressfully for the chance to land the centerpiece of his first recruiting class with the Trojans, along with two more ex-Sooners who decided to follow Riley from Norman to the West Coast.

“There's a long period of time where there's zero communication,” Riley said Wednesday while announcing his February signing period class. “And then all of a sudden, Caleb and his parents make the decision to jump into the transfer portal. We had a conversation shortly after that, and I don't think we talked even one bit of football. It was just kind of like a long-lost friend. It was good to be able to reconnect.”

Riley closed the deal with Williams for the second time, and the former five-star recruit enrolled at USC last Friday. The quarterback's commitment capped a bountiful haul for the Trojans in the transfer portal: Riley signed 13 players away from other schools, from Oregon to Virginia, restocking his first roster with elite talent.

Riley said he doesn't plan to rely on transfers this heavily in the future. His evaluation of the Trojans' 2021 roster led him to identify spots needing quick improvement, and his coaching staff worked aggressively to find veteran collegiate players who wanted to join them.

“This is a unique year and a unique situation,” Riley said. “When you’re trying to really revamp a roster and fill the amount of spots that we’re attempting to fill, being able to have all these different mechanisms to use to fill that has been extremely valuable.”

Mario Williams and Caleb Williams already are a tight duo, and Riley believes his new quarterback will form similar bonds with his new receivers. Although Caleb Williams kept the Trojans waiting for nearly a month before announcing his decision, Riley knows Williams is eager to get to work in his new home.

“He works really hard at his craft, and he does a great job of bringing people together,” Riley said. “I think that’s what he’s most excited about right now is to just go to class, to get with the guys, to get back just in the flow of being part of a team and part of a university.”

The Trojans' recruiting class is a mighty haul for a short time frame at a school that went 4-8 last season. Riley thinks the players were enticed by the chance to win quickly in a desirable location like Southern California, where name, image and likeness rights will only become more valuable in the uncertain recruiting landscape of the future.

“I think the real surge (in NIL) has happened now as recruiting has gotten competitive,” Riley said. “It’s a factor, and anybody that says it isn’t is not paying attention. ... I think it’s going to continue to be another way that we as a program can separate ourselves, and we absolutely plan to do that."