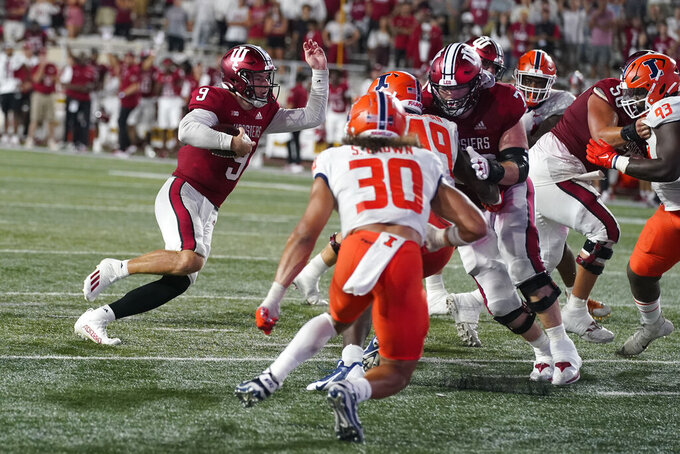 Indiana snapped an eight-game losing streak with a last-minute rally against Illinois. Coach Tom Allen's squad knows what a third 2-0 start in four seasons could mean — a bowl bid. They've reached the postseason each of the previous two times they won their first two games. Idaho, meanwhile, pushed Washington State to the brink last week. If it can pull off a road upset in Week 2, it would be a program-changing moment for the Vandals and first-year coach Jack Eck.

Indiana QB Connor Bazelak vs. Vandals opportunistic defense. The Hoosiers' new starter became the program's first quarterback in a quarter-century to top the 300-yard mark in his starting debut. This week, he needs to show more consistency, but it won't be easy against a defense that produced three sacks, recovered three fumbles and scored a touchdown last week.

Idaho: LB Fa'avae Fa'avae and S Mathias Bertram. Both players started their careers at FBS schools and both made significant impacts last week. Fa'avae had 11 tackles, one sack and one forced fumble in the opener and the Hoosiers remember him well from the 11-tackle performance he had in last year's matchup. Bertram made nine tackles and forced two fumbles in Week 1.

Indiana: LB Cam Jones. The three-time captain appeared to suffer a serious injury in the third quarter last week. Instead, he returned to the field and provided the inspirational words and actions to help Indiana make one late goal-line stand before getting another key stop to give Bazelak a chance to rally. Allen said Monday that Jones will be OK and the Indiana defense will follow his lead.

Idaho's average margin of defeat in the 11 games against Power Five opponents between an overtime loss to Virginia in 2011 and last week’s loss at Washington State was 48.2 points. That included last September's 42-point loss at Indiana. ... The Hoosiers had four takeaways last week, marking the fifth game during Allen's tenure they've had four or more in a game. ... Eck played college football at Wisconsin. ... Indiana opens with back—to-back home games for just the 30th time in the program's 126-year history. ... Idaho was a charter member of the Big Sky Conference before joining the Football Bowl Subdivision in 1996. The Vandals returned to the Big Sky in 2018. ... The Hoosiers will honor their 1967 Big Ten championship team during the game.