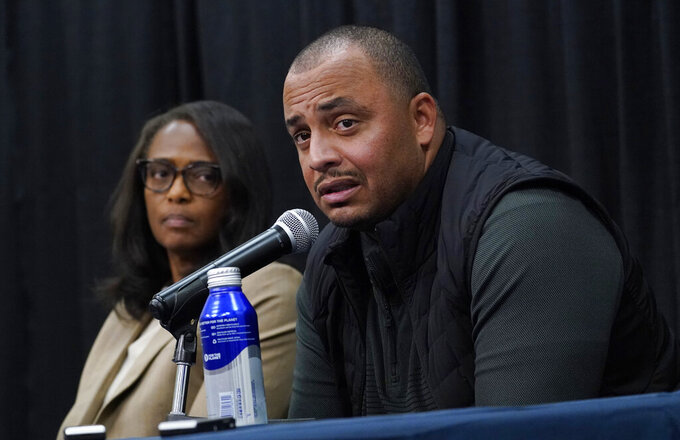 CHARLOTTESVILLE, Va. (AP) — Virginia has canceled Saturday's home football game against No. 23 Coastal Carolina in the wake of a weekend shooting on campus that left three players dead and another wounded.

The school said Wednesday it has not determined if the Cavaliers will play their traditional final regular-season game at Virginia Tech on Nov. 26.

Athletic director Carla Williams said the NCAA's rules are “permissive” as far as allowing the school to facilitate travel for the team to the players' funerals, should they choose to do so. Davis was from Dorchester, South Carolina, Chandler was from Huntersville, North Carolina, and Perry was from Miami.

“We’ll do whatever it takes that helps our players heal and support the families of our three players,” Williams said Tuesday.

First-year coach Tony Elliott, who said his goal since the shooting has been to bring the team together as much as possible, said he would take his cues from his players.

“My initial thoughts are to be sensitive of whatever the young men desire to do as it relates to their teammates,” he said. If the team decides it wants to attend the funerals, “I won’t stand in the way of that because this is way bigger than football. This is a life situation here.”

The Cavaliers have not practiced this week and Elliott said he hadn't thought about games since Sunday, focusing instead on his team and affected families.

“At this point, with the sequence of events and the timing, I just have been focusing on loving these players, consoling the families, trying to make sure that there’s no ripple effect with the guys on the team," he said. “Because, again, this is something that nobody is prepared to deal with until you’re inside of it. For me the focus is not past today.”

The university made several counselors available to the team and other student-athletes, Williams said, and Elliott became emotional as he described team meetings since Sunday.

Elliott attended the news conference after visiting the hospital where running back Mike Hollins, who was wounded in the attack, underwent a second surgery on Tuesday.

Hollins was removed from a ventilator Tuesday and was able to receive visits from family and friends, said Joe Gipson, a family spokesman.

A fifth student who was not a member of the football team also was wounded in the shooting.