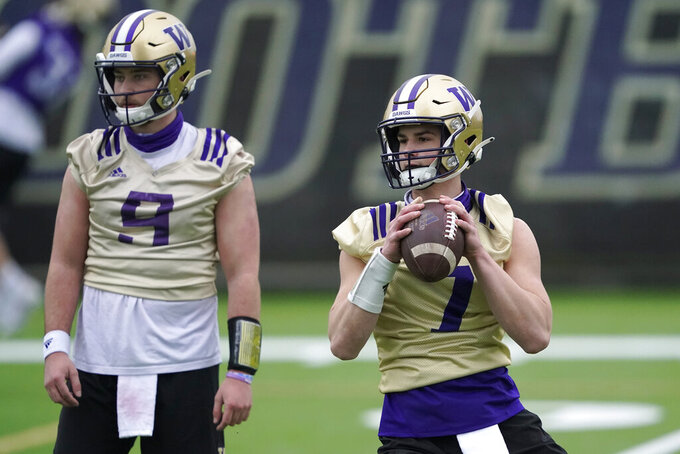 SEATTLE (AP) — If finally getting a month of spring practices was supposed to clarify Washington’s quarterback situation, it didn't quite work.

The incumbent, Dylan Morris, looked perfectly capable during a limited four-game season last fall. But Washington added Colorado State transfer Patrick O’Brien during the offseason and incoming freshman Sam Huard is one of the highest-rated recruits in the country and his family has a long connection to the Huskies program.

All three will get to make their final spring impressions Saturday when Washington plays its spring game before an expected 9,000 fans at Husky Stadium.

Washington isn’t in a rush to make a decision. The Huskies have plenty of time and options ahead of the September opener against Montana and their highly anticipated Week 2 trip to Michigan. But the decision on which QB — or how many QBs — is under center when the season begins is far from straightforward.

“We’re gonna do whatever’s best for our football team to win football games. There’s no laid out, or we’re gonna do this and this and this,” coach Jimmy Lake said. “The whole goal is to prepare our team to win football games. And whoever opponent we’re playing, we’re gonna put the best 11 out there on offense and the best 11 out there on defense that ensures us that we’re going to get the victory.”

Lake is a big fan of all the quarterback options at the Huskies' disposal.

Morris wasn’t flashy but he also didn’t make many obvious mistakes last season in his four-game stint. He was solid in wins over Oregon State and Arizona and led Washington back from a 21-0 deficit to beat Utah 24-21.

His 61% completion percentage and just one game with an interception were positives, but the Huskies struggled to push the ball downfield.

O’Brien has far more experience after starting each of the past two seasons at Colorado State. His best game last season came in a win over Wyoming, where O’Brien threw for 255 yards and two touchdowns and ran for another.

Huard would seem to have the smallest chance of getting on the field this fall but he has the deepest ties to the program. His father, Damon, and uncle Brock both quarterbacked the Huskies during the 1990s. Eventually, Huard is expected to be the next in his family to become Washington’s starting QB.

“I’m just happy that you know that room is talented, and they’re farther ahead than where we were last year,” Lake said. “So that’s gonna make our whole team better.”