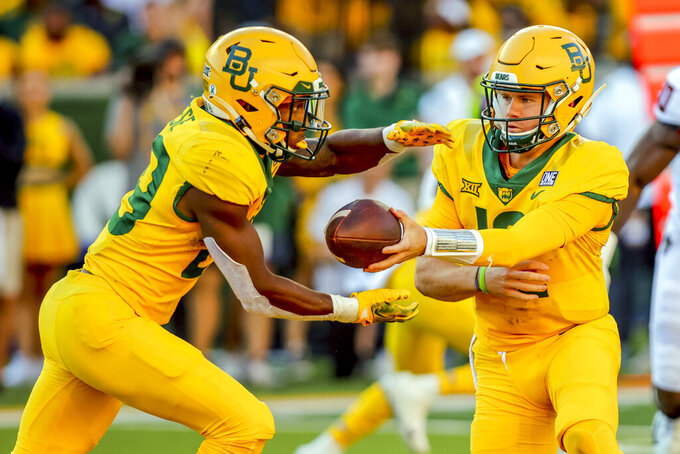 Line: Baylor by 3 1/2, according to FanDuel Sportsbook.

Both teams are coming off of bye weeks that followed losses. Baylor can hardly afford another setback in its bid to repeat as Big 12 champion after falling at home to No. 8 Oklahoma State. West Virginia is still trying to gain its footing after losing its first two league games, including a double-digit setback at Texas.

Baylor QB Blake Shapen against the West Virginia defense. Shapen threw for a career-high 345 yards in a 36-25 home loss to the Cowboys on Oct. 1. He had two touchdown passes with two interceptions. West Virginia is allowing a Big 12-worst 8.3 yards per pass attempt and has one interception this season, the lowest in the league.

Baylor: RB Richard Reese. After the Bears had to replace their three leading rushers from a year ago, Reese has scored seven touchdowns and is fourth among all freshmen nationally with 400 rushing yards.

West Virginia: WR Bryce Ford-Wheaton. The 6-foot-3 Ford-Wheaton is fourth in the Big 12 with 82 receiving yards per game. He is averaging seven receptions, often making contested catches, and has four touchdown grabs overall but none over the past three games.

West Virginia is 5-0 against Baylor in Morgantown ... Baylor WR Monaray Baldwin has only 12 receptions but leads the league with an average of 21.8 yards per catch. ... West Virginia freshman RB CJ Donaldson is in the concussion protocol and will miss the game after getting hurt at Texas. He leads the Mountaineers with 369 rushing yards and six TDs. ... Baylor has held four of its five opponents to under 100 yards rushing. ... West Virginia's third-down success rate of 49.4% on offense ranks 15th nationally.