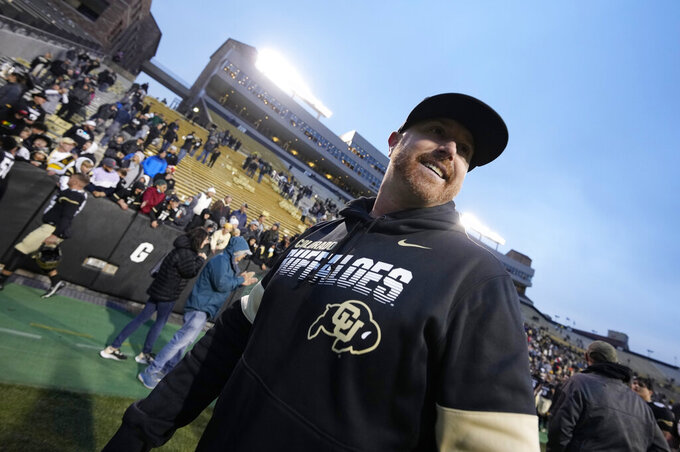 BOULDER, Colo. (AP) — Colorado coach Karl Dorrell parted ways with offensive coordinator Darrin Chiaverini on Sunday after a season in which the Buffaloes struggled to move the ball.

Chiaverini, who also doubled as the receivers coach, oversaw an offense that averaged 257.4 yards per game, which was the team's fewest since 1964. The Buffaloes also averaged 18.8 points as Colorado wrapped up a 4-8 season with a loss at Utah.

The 44-year-old Chiaverini spent six seasons in Boulder under three different head coaches. He was brought in from Texas Tech on Jan. 1, 2016, by then-head Buffaloes coach Mike MacIntyre.

Chiaverini served as the offensive coordinator or co-coordinator in five of his seasons at Colorado. Dorrell plans to soon fill the role. He's currently recruiting ahead of the early signing period.

“I believe it’s just time to go in a different direction,” Dorrell said in a statement. “We need a new perspective, which can bring new life and a different energy along with it. In the end, we need to do what’s best for the program, and at the same time, certainly wish Darrin the best in his future endeavors.”

Chiaverini was a standout receiver for the Buffaloes in the late 1990s. He led the team with 52 catches for 630 yards and five scores as a senior. Chiaverini was a fifth-round pick by Cleveland in the 1999 NFL draft.

More AP college football: https://apnews.com/hub/college-football and https://twitter.com/AP_Top25 Sign up for the AP’s