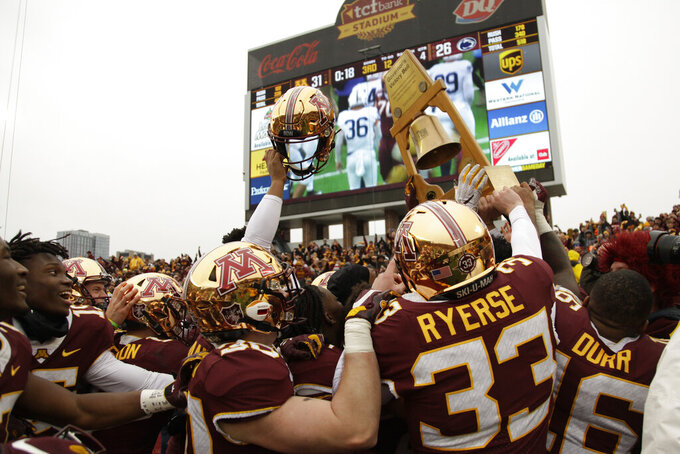 FILE - In this Nov. 9, 2019, file photo, Minnesota football players hold up the Governor's Victory Bell after winning 31-26 against Penn State during an NCAA college football game in Minneapolis. Big Ten is going to give fall football a shot after all. Less than five weeks after pushing football and other fall sports to spring in the name of player safety during the pandemic, the conference changed course Wednesday, Sept. 16, 2020, and said it plans to begin its season the weekend of Oct. 23-24. (AP Photo/Stacy Bengs, File)

When it came time to confront a global pandemic, we should've known college football would whiff on the tackle.

This flimsy collection of largely autonomous fiefdoms, each concerned mainly with hoarding wealth and power, was never going to make the right call against a fearsome opponent like the coronavirus.

Not this sport, which has always been perfectly content to rake in billions of dollars off the backs of unpaid laborers, poisoning our system of higher education by transforming campuses into no-wage professional franchises.

Those in charge followed their usual game plan when faced with a potentially deadly game of roulette.

They followed the money.

“We’re kind of undergoing a natural experiment to see what happens” was the ominous assessment of Cyrus Shahpar, director of the epidemic prevention team at Resolve to Save Lives, an organization that works with countries around the world in dealing with the outbreak of diseases.

“You’re going to get a lot of college athletes with COVID-19 infections," Shahpar said, “and we don’t know the long-term impact of that.”

But without one body making one set of rules for everyone, college football carries on as a reckless Petri dish in the midst of a pandemic that already has claimed nearly 200,000 American lives.

A quick recap of the lowlights:

— The Big Ten, reversing course on its initially admirable decision not to play football this fall, now says it will launch a hurried, eight-game season on Oct. 24. While there was much posturing about this being a science-based decision, it was clear the conference was mainly concerned about losing ground to the Southeastern Conference and other leagues that failed to follow its lead.

— Speaking of COVID-19 like it was nothing more than the sniffles, coach Ed Orgeron of defending national champion LSU casually dropped that a big chunk of his roster has already been stricken with a virus that could have long-term health ramifications we don't yet know about. “Most of our players have caught it,” Orgeron said. “I think, hopefully, that once you catch it, you don’t get it again." Then, as if giving himself plausible deniability, he added, “I’m not a doctor."

— Georgia Southern went ahead with its season opener against Campbell even though 33 players — THIRTY-THREE! — were not able to play. The school wouldn't reveal how many of those players, which included seven starters, were held out after being stricken with or exposed to COVID-19.

— That lack of transparency was right in line with schools around the country that have treated positive tests much like state secrets. Oklahoma coach Lincoln Riley said he wouldn't be sharing his team's COVID-19 test results during the season because it puts the Sooners at “a competitive disadvantage," showing exactly where his priorities lie. Many of his colleagues have taken a similar approach.

— The coronavirus already has forced the postponement of several games just a couple of weeks into the season, hardly a promising sign with schools facing a limited window of potential make-up dates and fears that the onset of flu season will lead to a “twindemic” that makes it even more difficult to keep players healthy.

— Austin Peay probably wishes it had called off its first game. None of the team's three long snappers were able to play, so a linebacker tried to do the job. He botched a couple of snaps and the Governors lost on a last-minute score.

The Big Ten was the first of the Power Five conferences to postpone the season until at least after the first of the year. The league expected the rest of its brethren to follow suit, but with each conference free to do its own thing, only the Pac-12 came along for the ride.

Looking on enviously as the Southeastern Conference, Atlantic Coast Conference and Big 12 carried on with plans for the season, the Big Ten faced the backlash of players, coaches and parents. More ominously, the league knew it might take years to recover from the blow to its finances and recruiting efforts.

That was a diagnosis the league could not accept.

“We’re in a better place, regardless of how we got here or how painful it was during the time we waited to get this moment," Ohio State athletic director Gene Smith said after the decision Wednesday. “That’s all behind us. What’s beautiful is that we have a process and protocols in place that’s based on science and based on lessons learned since Aug. 11,” when the league initially voted not to play in the fall.

Somehow, a mere 36 days later, the Big Ten found a miracle cure for all its concerns. Most assuredly, it came wrapped in dollar signs.

In apparently unrelated news, Big Ten school Penn State announced that the total number of COVID-19 cases on its campus has climbed to 1,146.

While the Big Ten's decision came with some rigorous testing guidelines, that doesn't apply to the rest of the student body. And therein lies the madness of playing college football during a pandemic, on campuses that are teeming with non-football-playing students who don't have coaches, trainers and teammates monitoring their every move.

“Even with schools that have had issues ... I've not heard of any positives taking place within athletic facilities or as part of athletic activities," said Georgia Tech athletic director Todd Stansbury, whose team will play its second game Saturday against Central Florida. “The difficulty is outside of our so-called controlled bubble."

Those issues aren't likely to get any better.

But college football has made its call.

The wrong one, as usual.