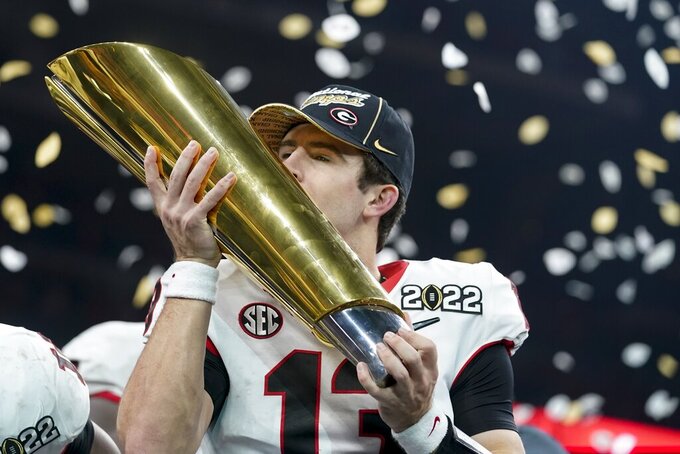 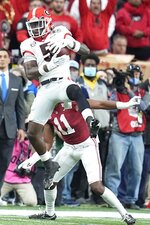 INDIANAPOLIS (AP) — After 41 agonizing years, the Georgia Bulldogs were not about to let another championship slip through their fingers.

Not even after a bizarre fumble and recovery handed Alabama a go-ahead touchdown with just over 10 minutes to go in the national title game Monday night.

The gritty Bulldogs and their undersized quarterback, the former walk-on known as “The Mailman,” finally delivered a national championship to the red-and-black faithful.

The fact that they did it against Nick Saban and the mighty Crimson Tide, the team that had dished out one heartache after another to the Dawgs, only made the triumph that much sweeter.

And on top of the Atlanta Braves winning a World Series? Suddenly, a city and state that has known so much sporting misery can call itself Winnersville, U.S.A.

“I felt like I got hit by a train,” quipped Georgia safety Lewis Cine, the game's defensive MVP, at morning-after news conference following a very short night.

The final was 33-18 — a deceiving score for a game that was an ugly, old-school battle of field goals for nearly three quarters.

It was a thing of beauty for the Bulldogs.

“I tell you what, there’s gonna be some property torn up in Indianapolis tonight,” coach Kirby Smart screamed after giving a big smooch to the championship trophy, harkening up the celebratory words once spoken by Georgia’s late radio play-by-play man, Larry Munson.

That wasn’t the only gesture tying together all the years since Georgia’s last national title.

Smart embraced 89-year-old Vince Dooley, the coach of that previous title team, who had only recently recovered from a bout with COVID-19 before making the trek to Indianapolis.

Smart earned his trophy with a dominant defense — which bounced back resoundingly from a 41-24 beating delivered by Alabama in the Southeastern Conference championship game — and a much-debated decision to stick with Stetson Bennett as his quarterback instead of the more heralded JT Daniels.

Alabama led 9-6 until Zamir White scored the first touchdown of the night on a 1-yard run, sending the Bulldogs to the final period up 13-9.

After Bama's fourth field goal made it a one-point game, the Tide caught a huge break.

It was the sort of play that snake-bit Georgia had come to expect over the years, as every attempt to win its first national title since 1980 was turned away.

Under heavy pressure, Bennett tried to throw the ball away. But it slipped off his fingertips a split-second before his right arm came forward, making it a fumble.

Everyone in the stadium thought it was an incomplete pass, even Alabama's Brian Branch, who nonchalantly collected the wobbling ball in his arms just before he stepped out of bounds.

The officials upheld their fumble call after a lengthy video review.

Alabama quickly scored its first touchdown of the game. Just like that, the Tide was back in front 18-13, and every Georgia fan — from Indianapolis all the way back to the Peach State — was surely envisioning how they'd be moaning about that crazy play over stiff drinks in the days and weeks and years to come.

Only, these Bulldogs wrote a different ending.

This time, it's champagne all around.

Bennett, who originally walked on at Georgia and even spent a year playing at a junior college, justified Smart's faith after his big mistake.

“Our defense played such a great game,” Bennett said. “I wasn't going to be the reason we lost the game.”

With fire in his eyes, the fifth-year senior needed just four plays and a pass interference penalty to guide the Bulldogs on a touchdown drive that will be remembered as long as games are played between the hedges in Athens, Georgia.

The capper was a 40-yard throw to freshman Adonai Mitchell in the right corner of a end zone, putting the Bulldogs back on top to stay at 19-18 after a 2-point conversion failed.

That drive, that score, seemed to lift the cloud that has hovered over this program since its only consensus national title.

When Georgia got the ball back again, Bennett extended the lead with a 15-yard touchdown throw to another freshman, Brock Bowers.

And, finally, with Alabama and its Heisman Trophy-winning quarterback, Bryce Young, trying to muster a drive that could force overtime, Kelee Ringo picked off a pass and sped 79 yards in front of the Georgia bench for the clinching score.

After watching five other SEC schools win a total of 15 national titles since its last championship — seven of them by Alabama, including a couple at Georgia's direct expense — the Bulldogs are back on top.

“I told our guys, ‘The only way you’re getting home is through them,'” Smart said, referring to Saban, his former boss, and the Tide. “And they did it.”

It took far longer than anyone would have expected back in 1980.

That only made it more satisfying.

After Bennett watched Ringo's interception on the big screen — remember, the quarterback is not that tall, so he really can't see the field from the sideline — he burst into the first tears he has shed in as long as he can remember.

“It just lifted off my shoulders,” Bennett said Tuesday morning. “That was when it all hit me, the wave of emotion. I can’t describe it. I wasn’t expecting it. It caught me off guard.”

Smart, a former Georgia defensive back, was called back to his alma mater in 2016 with an explicit charge to produce this very moment.

Nothing less than a national championship would do.

With that out of the way, Smart has no intention of requiring another 41 years to do it again. He issued a challenge to all those fans who turned Indy into Athens North.

“I just hope they remember this feeling and understand they don't need to get spoiled," Smart said. "They need to stay hungry like these players.”

Let them be spoiled for a little while.

After 41 years, they deserve it.