Despite late heroics, No. 20 USC expects more from offense 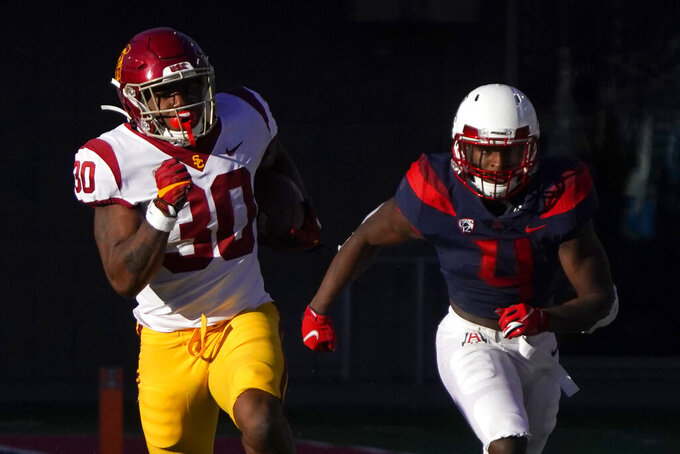 Southern California running back Markese Stepp (30) breaks away from Arizona defensive back Christian Roland-Wallace (4) in the second half during an NCAA college football game, Saturday, Nov. 14, 2020, in Tucson, Ariz. (AP Photo/Rick Scuteri)

LOS ANGELES (AP) — Through two games, there have been two disparate sides to the Trojans.

There were stretches when Southern California quarterback Kedon Slovis makes throws without the same velocity he showed as a freshman, only for him to find that arm strength in the closing minutes to lead game-winning drives against Arizona State and Arizona.

There are times when the ground game glides down the field with chunk plays and consistent gains, only to fail to convert in short yardage situations.

Coach Clay Helton believes No. 20 USC is closer to being the better version of what it has shown so far, something he hopes to confirm against Utah on Saturday.

“I look forward to seeing us have a perfect game,” Helton said Tuesday. “It’s always out there. That’s the beauty of the game, you’re always fighting to have a perfect game. But if you’re talking about the players as this team and individually, I’m seeing that growth.”

Statistics back up some of Helton’s confidence.

USC (2-0, 2-0 Pac-12) is averaging 527 yards per game, including 175 yards rushing against the Sun Devils and 173 against the Wildcats. The offensive line, which includes new starters at left and right tackle, has allowed three sacks on 105 called passes for Slovis. The Trojans have reached the red zone on 14 of their 27 possessions.

However, USC has struggled to maximize those opportunities, in part because of a shocking inability to run the ball when needing a single yard. They are 4 of 11 running on third- and fourth-and-1.

While fans and even the Fox broadcast team of Gus Johnson and Joel Klatt were questioning why USC wouldn’t operate under center in such situations, offensive coordinator Graham Harrell said there is no reason to step away from his Air Raid offense operating out of the shotgun.

“It’s just a mentality,” Harrell said. “At the end of the day if you come in there with the right mentality and the right mindset and decide you’re gonna be physical and go get it, we’re gonna go get it.”

As for Slovis, he is 70 of 98 passing for 706 yards and three touchdowns against one interception to start his abbreviated sophomore season. But much of that success comes from how he elevated his play in the closing minutes against Arizona State and Arizona, completing 21 of 26 attempts for 257 yards and three touchdowns in the final four drives of those comeback wins.

Slovis was not nearly as sharp at the start of those games. A lack of tight spirals at times has raised concerns Slovis is not fully recovered from offseason elbow surgery after suffering an injury in the Holiday Bowl, but he rejected the notion. Slovis said his mechanics were not as consistent as they needed to be and improving his footwork and throwing motion will result in better throws.

“I think more than anything, he kind of got in his head because early on a ball probably slipped out of his hand and then he thought about it too much, but there’s nothing wrong with Kedon’s mechanics,” Harrell said.

Whatever the cause, USC cannot afford more lapses on offense if it hopes to end its three-game losing streak in Salt Lake City.

“I think we’ve been pretty good up to this point, but we just need to keep working so we can be assignment perfect and not make any of those little mistakes that have a big impact,” right tackle Jalen McKenzie said.