Dominant Dogs: Is this Georgia team even better than 2021? 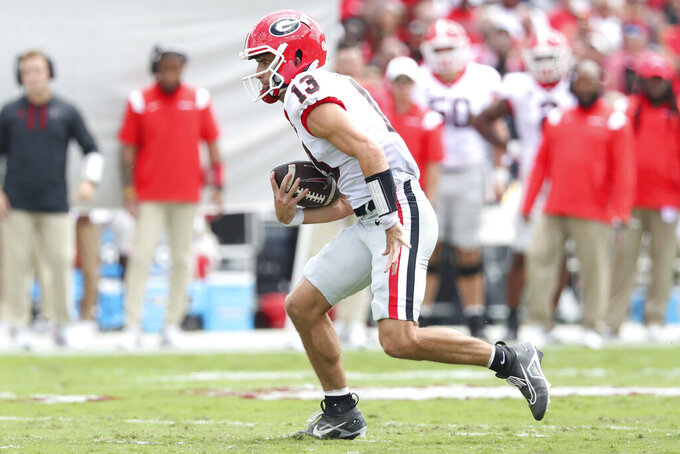 Georgia quarterback Stetson Bennett (13) runs for a first down during the first half of an NCAA college football game against South Carolina on Saturday, Sept. 17, 2022 in Columbia, S.C. (AP Photo/Artie Walker Jr.) 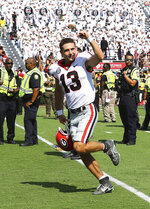 ATHENS, Ga. (AP) — College football coaches are notorious for hyping up their opponents with preposterous accolades.

Still, it was a bit jarring to hear Kent State's Sean Lewis sizing up the reigning national champion Georgia Bulldogs.

“I don't think it's an exaggeration,” Lewis said Monday, “to say this is the greatest collection of talent ever assembled on a football team.”

OK, maybe it was just the desperate ramblings of a coach looking to plant the seeds of complacency in the top-ranked Bulldogs before they tear into his overmatched team on Saturday.

After all, Georgia lost a record 15 players in the last NFL draft — five of them first-rounders from one of the great defenses of the last quarter-century.

But three games into a new season, Lewis' assessment doesn't seem that out of line.

Seriously, could this Georgia team be even better than the last one? You know, the one that celebrated in Indianapolis some eight months ago after claiming the school's first national title in 41 years?

“I think so," said Bulldogs defensive back Christopher Smith, sounding more matter-of-fact than boastful, “but that just comes with our standard. Our standard is our motivation. We hear a lot of things that people say, but we never fade into that. We just continue to work.”

The Bulldogs have rampaged through their first three opponents while barely breaking a sweat in the southern humidity.

They blew out then-No. 11 Oregon 49-3 in the season opener. They coasted past FCS opponent Samford 33-0. And this past weekend at South Carolina, they demolished their Southeastern Conference rival 48-7 in a performance that was so dominating many of the home fans went streaming for the exits by halftime.

The only touchdown allowed so far by the Bulldogs came in the waning seconds against the Gamecocks, a meaningless score that came long after the starters had been pulled.

Still, it seemed to tick off the Georgia defenders, who have set a very high standard for themselves.

“It definitely bothered me,” Smith said. “We never want to give up any points whenever we step out on the field, and we were so close to keeping a goose egg on the board. But things didn't work out, so back to the drawing board. That gives us something else to fix.”

While the defense has kept up its dominating ways — even with all those former Dawgs now playing in the NFL — the offense has clearly stepped up its game from a year ago.

Stetson Bennett, the former walk-on quarterback who has worked his way into the early Heisman conversation, directs an offense with a seemingly unlimited supply of weapons at his disposal.

Eleven players had at least one catch against the Gamecocks, all of it adding up to 339 yards and 16.1 yards per reception.

Ten players ran the ball, with no one gaining more than Bennett's 36 yards on three carries, but the cumulative effort producing 208 yards and a 5.9 average.

“When things are working, you roll with it,” coach Kirby Smart said. “Getting the players out on the perimeter to do their things whether it’s receivers, tight ends, or running backs. I think we have done a good job of dispersing the ball and letting everybody get a piece of the action.”

Last year's Georgia team had an offense that played it close to the vest, knowing it could win most games simply by being efficient and not making any major mistakes.

Not so with this group, which is willing to attack from anywhere on the gridiron.

Bennett has been on the field for 21 possessions, which have produced 14 touchdowns, four field goals, a missed field goal, and just two measly punts.

Last Saturday, it was Brock Bowers taking the lead role.

The tight end had five catches for 121 yards and two touchdowns — one of them a remarkable, twisting grab before tumbling out of bounds, the other a 78-yard scamper in which he broke one tackle, sidestepped another defender and took off down the middle of the field like Usain Bolt.

For good measure, Bowers scored the first of his three TDs on a 5-yard reverse.

But Bennett has far more players he can go to than just Bowers, which means the defense can't put too much focus on the tight end described by Kent State’s coach as a “superfreak."

“I think that’s what is separating us,” Smart said. “It’s not just one player. They can’t key in on one receiver, tight end, or running back.”

Smart refused to get drawn into any speculation about whether this team could actually be better that his 2021 squad.

“I don’t do comparisons," he said. “You can’t compare anybody to last year, because last year’s team, 15 of them are in the NFL.”

But the way things are going, the biggest challenge facing the Bulldogs might be overconfidence.

“This team has a long way to go,” Smart said. “The worst thing that can happen to this team is to start believing what people say about them.”