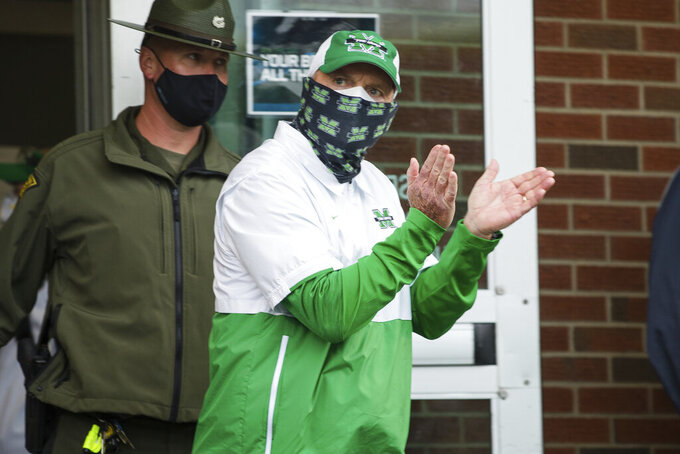 Marshall's pandemic-interrupted season has turned into a special one and the unbeaten Thundering Herd want to keep any momentum going as it looks to secure a berth in the Conference USA championship game. FBS independent Massachusetts is playing the second of a reduced three-game schedule this season.

Marshall RB Brenden Knox vs. the Minutemen run defense. Knox is 11th in the Bowl Subdivision at 111 yards per game. Although he's only caught three passes this season, he ran 58 yards for a touchdown two weeks ago after grabbing a screen pass. Massachusetts allowed 308 rushing yards in a 41-0 loss to Georgia State on Oct. 17.

UMass: WR Jermaine Johnson. He led the Minutemen a year ago with 37 receptions as a freshman. Johnson was held to two catches for eight yards in the opener.

Marshall: LB Tavante Beckett. The senior has had three monster games this season, making 13 tackles against Florida Atlantic, 16 against Appalachian State, and eight tackles and three fumble recoveries against Western Kentucky. One of the recoveries was turned into a touchdown.

UMass has 41 redshirt or true freshmen on its roster. ... UMass canceled its season on Aug. 11 due to concerns surrounding the pandemic, then reversed course a month later, saying it would play a limited number of games. ... Marshall saw seven of its scheduled games called off due to the pandemic. Two of them against Rice and Florida International have been rescheduled for December. ... Minutemen second-year coach Walt Bell has not revealed who his starting quarterback will be for Saturday's game. Mike Fallon completed 7-of-12 passes for 41 yards with an interception against Georgia Southern. ... The teams' only previous meeting was in 2001, with Marshall winning 49-20. ... UMass made all three fourth-down conversion attempts against Georgia Southern.