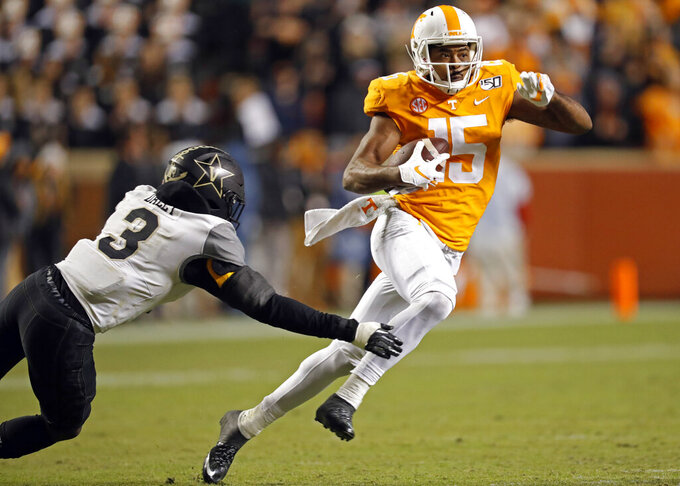 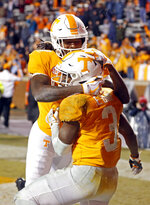 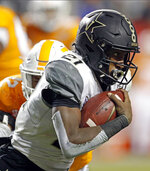 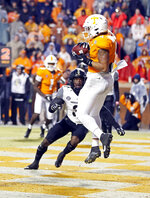 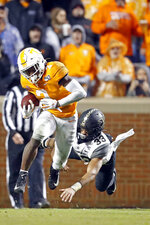 KNOXVILLE, Tenn. (AP) — Tennessee’s Eric Gray had provided glimpses of his big-play ability early in his freshman season but didn’t have much production to show for it.

That all changed on a rainy Saturday afternoon.

Gray rushed for 246 yards and three touchdowns — including breakaways of 56 and 94 yards — as the Volunteers trounced Vanderbilt 28-10 to end the regular season with a five-game winning streak. Gray more than doubled his season rushing total as he showed just how much he’s discovered over the course of the season.

“You learn that holes close quick and you’ve got to hit them fast in order to break it,” Gray said. “At the beginning of the year, you’re kind of still learning from high school into college, and I feel like I’ve learned to be a college running back, just being able to hit the hole fast and break it when I need to.”

“When things aren’t going the way you want them to go and there’s all kind of noise out there, it’s hard for them to kind of stick together,” Tennessee coach Jeremy Pruitt said. “These guys did. They did what most teams can’t do. It says a lot about their character.”

Vanderbilt (3-9, 1-7) was seeking its fourth straight victory in an annual series that Tennessee has traditionally dominated. Tennessee went 28-1 against Vanderbilt from 1983-2011, but Vanderbilt won five of their seven matchups from 2012-18 and had beaten the Vols by an average margin of 18 points the last three years.

Tennessee made sure Vanderbilt couldn’t extend that streak.

“When you lose to Vanderbilt, just to keep it real with you, that’s embarrassing,” Tennessee defensive lineman Matthew Butler said.

Vanderbilt was a three-touchdown underdog and watched its remote hopes for an upset fade when 1,000-yard rusher Ke’Shawn Vaughn appeared to hurt his left shoulder on the Commodores’ first play from scrimmage.

Vaughn returned to the game on Vanderbilt’s next series but sat out the entire second half and finished with six carries for just 13 yards. Vanderbilt also played the entire game without injured tight end Jared Pinkney.

Gray was the dominant running back in this game instead.

The Tennessee freshman has earned plenty of praise for his big-play potential, but he had just 207 yards rushing and 81 yards receiving through the Vols’ first 11 games and hadn’t been much of a factor since the first month of the season.

“I thought Eric probably in the middle part of the season maybe lost a step,” Pruitt said. “It happens lots of times to freshmen. They get a little worn down playing against bigger men, just the day-to-day grind. But over the last probably couple of weeks, he kind of looked like his old self and had a little more pep in his step. It showed today.”

Gray had the fifth-highest single-game rushing total ever by a Tennessee player.

His 56-yard and 94-yard runs were Tennessee’s two longest carries of the season. Gray's 94-yarder was the second-longest run from scrimmage in Tennessee history, trailing only Kelsey Finch’s 99-yarder in a 27-17 loss to Florida in 1977.

On his first touchdown Gray ran through a big hole on the right side, then cut to his left and was untouched on a 56-yard breakaway that put Tennessee ahead for good at 7-3. Gray’s first career touchdown run also was Tennessee’s longest carry of the season up to that point.

On his 94-yard run, Gray raced through the right side of the line, eluded safety Dashaun Jerkins’ diving tackle attempt just beyond the line of scrimmage and wasn’t touched the rest of the way.

Vanderbilt: This game ended a disappointing season for Vanderbilt, which was expecting bigger things when Vaughn, Pinkney and Kalija Lipscomb all returned for their senior years after big performances in 2018. Vanderbilt instead went through a revolving door at the quarterback position and struggled on both sides of the ball. The Commodores now must figure out how to turn things around without Vaughn, Pinkney or Lipscomb. Vanderbilt coach Derek Mason, who owns a 27-47 record in six seasons, will get an opportunity to fix this. Athletic director Malcolm Turner already has indicated Mason will be back in 2020.

Tennessee: The Vols overcame a sluggish performance from quarterback Jarrett Guarantano because Gray ran wild and the defense continued its late-season surge. Guarantano went 6-of-17 passing for 120 yards with a touchdown and an interception.

The two teams scuffled late in the game on the Tennessee sideline after Vanderbilt punt returner Justice Shelton-Mosley was tackled by Tennessee’s Jauan Jennings while going out of bounds. Video appeared to show that as Jennings was getting up, his foot hit Shelton-Mosley’s head, but it was unclear whether or not the move was intentional.

No penalty was called on the play.

Vanderbilt’s season is over.