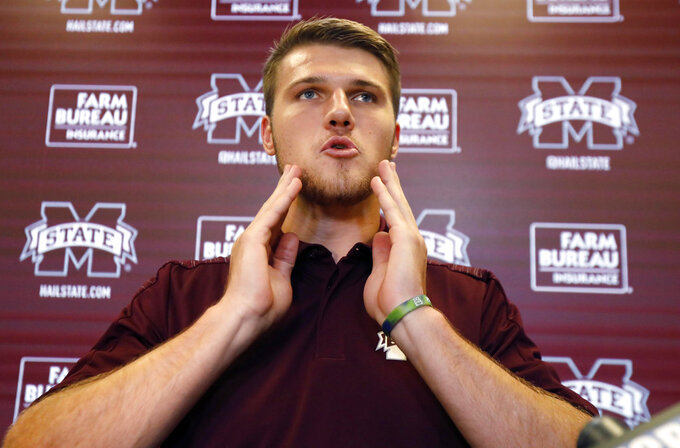 STARKVILLE, Miss. (AP) — Nick Fitzgerald has been one of the Southeastern Conference's better quarterbacks the past two seasons. That's why the first week of his senior season was such a humbling experience.
Instead of preparing to lead Mississippi State against Stephen F. Austin, the veteran QB was running the scout team, serving a one-game suspension for a "violation of team policy" that happened last spring.
"It was rough — I take full responsibility for the reason I was out," said Fitzgerald, who declined to elaborate on what that reason was. "I embraced my role as scout team quarterback when I was in there. Just tried to give the defense the best look I possibly could."
No. 18 Mississippi State (1-0) was fine without Fitzgerald during Saturday's 63-6 victory against overmatched Stephen F. Austin . Now he returns for the Bulldogs when they go on the road to face Kansas State (1-0) on Saturday.
Despite the suspension, Fitzgerald appears to have the full backing of his team. He was elected a team captain following the spring incident, and first-year coach Joe Moorhead has gone out of his way over the past week to praise the quarterback's leadership.
Mississippi State quarterbacks coach Andrew Breiner said Fitzgerald's preparation has been excellent. If anything, the coach said he's had to make sure his quarterback stays calm.
"He wants all the information as quickly as he can," Breiner said.
Fitzgerald has been one of the SEC's most productive quarterbacks over the past two seasons, especially when running the ball. His 2,486 career yards rushing are the fourth-most for a quarterback in SEC history and he needs less than 500 more to jump over former Florida star Tim Tebow for the most in league history.
The 6-foot-5, 230-pound Fitzgerald will be playing in his first game since he suffered a dislocated right ankle in last year's Egg Bowl. Mississippi State offensive coordinator Luke Getsy doesn't expect nerves to affect Fitzgerald despite the long layoff.
"I doubt it will be too big for Nick," Getsy said. "He's experienced a lot in his career. He's a humble guy and a focused guy. He's just ready to rock 'n' roll. He's probably going to have his spikes laced up first before anyone else."
Sophomore Keytaon Thompson replaced Fitzgerald during the win against Stephen F. Austin.
Thompson, a 6-foot-4, 225-pound sophomore, threw for 364 yards and five touchdowns in his second career start. He also ran for 109 yards and two touchdowns against the Lumberjacks, who play in the Football Championship Subdivision and were clearly overmatched.
Moorhead said Fitzgerald handled the suspension well, embracing his scout team role during practice last week and helping Thompson prepare.
"He was a great resource for Thompson in his second start," Moorhead said on Monday. "As a coach and program, it's easy to mentor the guys when they're doing well and scoring touchdowns. Everybody makes mistakes, but I think that's part of the process. We need to do as good of a job when things go bad as when things go well.
___
Follow David Brandt on Twitter: https://twitter.com/davidbrandtAP
___
More AP college football: https://apnews.com/tag/Collegefootball and https://twitter.com/AP_Top25