Kansas St presses on with new coach after Snyder retirement 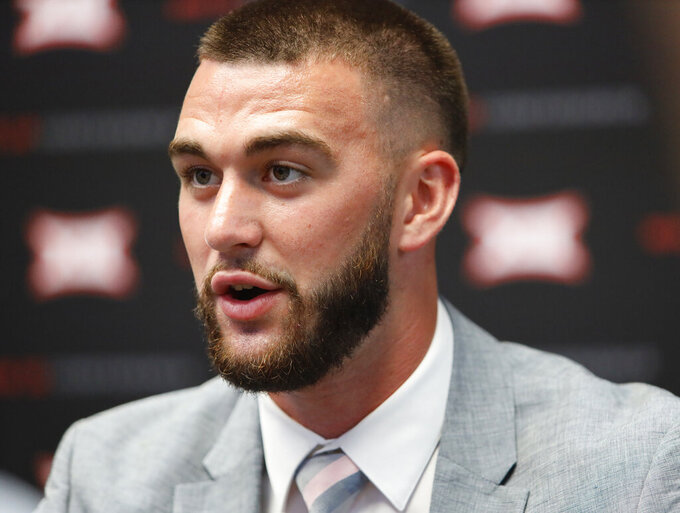 FILE - In this July 16, 2019, file photo, Kansas State quarterback Skylar Thompson speaks during Big 12 Conference NCAA college football media day in Arlington, Texas. There is no question whether Thompson will be under center when the Wildcats open the season against Nicholls State. Nor is there any doubt he’ll be there the rest of the year. (AP Photo/David Kent, File)

It was 2005, and the Hall of Fame coach had suddenly retired. The Wildcats hired a nondescript offensive coordinator from Virginia named Ron Prince and he briefly energized the program, only to watch it fall so far into mediocrity that Snyder was summoned back to the sideline.

Time for a second chance.

Snyder's retirement after last season was followed by the hiring of Chris Klieman, who is about as different from Prince as possible. Klieman has never been a major college coordinator, spending most of his career at lower levels, but he was wildly successful as the head coach at North Dakota State. So successful that his team once upset the Wildcats in Manhattan.

Now he gets a chance to replace arguably the most beloved figure in school history, a coach who took what was once considered the worst program in college football and turned it into a contender.

"Well, it's one of the most synonymous names in college football history not just at Kansas State but anywhere," said Klieman, who led the Bison to four of the past five Football Championship Subdivision national titles. "We have a culture because of what Coach did. I know I'm not going to fill his shoes. I'm just trying to continue in his legacy, but doing it our own way."

Yes, the differences around the program are readily apparent.

Snyder was loath to mess with Kansas State's classic look, but Klieman is open to the popular idea of alternate uniforms. Snyder took his time in recruiting, making sure guys were the right fit, while the new coaching staff has been much more aggressive. And perhaps more than anything else, Snyder buttoned up his program to the point that getting through the doors was like storming Fort Knox.

Klieman has gone the opposite direction. He has embraced social media, allowed cameras a behind-the-scenes look at the program, and made sure the fan base has felt a part of the process.

The Wildcats return one of the Big 12's best offensive lines, quarterback Skylar Thompson and a bevy of playmakers on defense. But whether they can gel with the new coaching staff and an influx of new players to build on a 5-7 finish a year ago remains to be seen.

"There's a bunch of them that are returning from last year felt that they probably left a couple of games out there," Klieman said. "Having the hunger for those guys, I see it in their eyes."

The Wildcats have wavered at quarterback for years, even at one point using a wide receiver under center because of injuries. But following the transfer of Alex Delton, Thompson heads into fall camp as the clear-cut No. 1 with a bevy of promising young prospects behind him.

"Confidence has been the biggest thing," Thompson said, "and any time you have your head coach telling you, 'This is your offense. This is your team.' Any time you hear that from your coach, it gives you a lot of confidence."

Kansas State had no letter-winners returning at running back, and the wide receiver corps of a year ago left plenty to be desired. But a pair of transfers, James Gilbert from Ball State and Harry Trotter from Louisville, have solidified that depleted backfield, leaving pass-catchers as the biggest question mark on the offensive side of the ball.

Scottie Hazelton turned Wyoming's defense into one of the nation's best, and now he will try to replicate the feat in the Big 12. He spent his first few weeks on campus dissecting the Big 12, then put together a defense that is tailored toward defending the league's potent offenses.

"We said, 'Here is all of the stuff that we all feel comfortable teaching, and how can we make adjustments?'" Hazelton said. "That is kind of what we did, to try to make it so it fits together."

IF YOU BUILD IT

One of the challenges of rebuilding Kansas State is the sparse in-state recruiting base. That doesn't seem to bother Klieman, who explained: "There's a lot of guys that have a burning desire and are looking to compete. We have to find those guys."

The Wildcats start against Nicholls State on Aug. 31 and face Bowling Green a week later, but things get real in a hurry. A trip to Mississippi State looms Sept. 14, followed by Big 12 play.