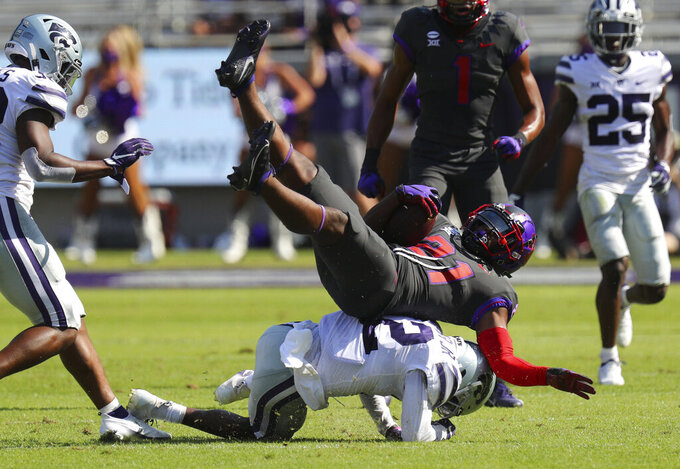 FORT WORTH, Texas (AP) — Kansas State got another non-offensive touchdown and a solid performance from a true freshman quarterback in his first start against one of the Big 12's best defensive coaches.

That was enough for the Wildcats to improve to 3-0 in the Big 12 Conference.

AJ Parker returned an interception 37 yards for a touchdown and Will Howard accounted for 203 of K-State's 289 total yards in a 21-14 win at TCU on Saturday.

“They pressured him quite a bit. I thought he did a really nice job getting us into some good checks” coach Chris Klieman said of Howard. “He’s going to learn and get better. You’re talking about a true freshman coming into TCU, and his first start is against a Gary Patterson-coached defense. It’s a pretty tall task, and I thought he did a great job.”

Senior quarterback Skylar Thompson didn’t even make the trip to Fort Worth, a week after getting injured in the first half against Texas Tech. Howard played the second half of that game while Thompson was on the sideline out of uniform and with his arm in a sling. Klieman would only say afterward that Thompson wasn't available.

The interception return by Parker in the third quarter that made it 21-7 was the 119th non-offensive TD since 1999 for Kansas State. That is the most by any FBS team in that stretch — going into Saturday, Alabama and Virginia Tech were tied for the second-most with 108.

With a chance to seal the game on a third-and-1 keeper with just over a minute left, Howard tripped while by himself for no gain near midfield. Klieman never thought about going for it since his defense was playing so well, and the punt pinned the Horned Frogs (1-2, 1-2) at their own 4.

“You can laugh about it now that we won. It was a read play, I made the right read,” Howard said. “I couldn’t tell you what really happened. You know fatigued legs, and tripped up a little bit, which obviously can’t happen."

TCU still had a chance to tie the game after the Wildcats were penalized for roughing the passer on a desperation pass by Max Duggan as time expired. The penalty put the ball at the K-State 39 for an untimed play, and Duggan's heave into a crowd in the end zone was knocked to the ground.

“I’m disappointed in the loss, not how some of the younger guys played,” TCU coach Gary Patterson said. “In a game where you don’t have many choices, you have to make plays when you’re supposed to make plays and you can’t give them anything and we gave them something. At the end of the day we have to do a better job on all accounts.”

Blake Lynch kicked field goals of 25 and 53 yards in the first half, the shorter kick coming after the 80-yard run on the opening drive by Howard, whose 4-yard TD run gave the Wildcats a 14-7 halftime lead after the 2-point conversion.

The Wildcats could get into the Top 25 on Sunday for the first time this season. They were the first team out of this week's poll.

Kansas State: The Wildcats have rebounded from that season-opening home loss against Arkansas State to start 3-0 in the Big 12 for the first time since 2014.

TCU: The Horned Frogs have lost four home games in a row. They were coming off their seventh win in nine years against Texas, but have lost both home games after having their only nonconference game called off because of a COVID-19 outbreak among a cluster of players and staff.

Kansas State: At home for the Sunflower State showdown against Kansas on Oct. 24.