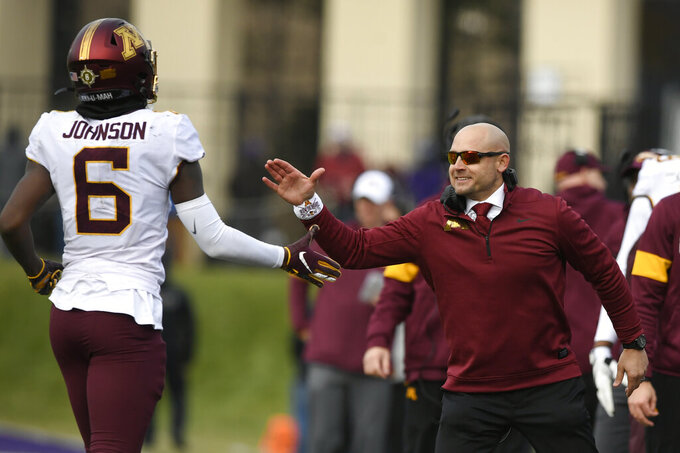 FILE - In this Saturday, Nov. 23, 2019, file photo, Minnesota head coach P.J. Fleck, right, celebrates with wide receiver Tyler Johnson (6) after Johnson caught a touchdown pass during the second half of an NCAA football game against Northwestern, in Evanston, Ill. Fleck has never lacked for clever ways to connect and motivate his players. (AP Photo/Paul Beaty, File)

MINNEAPOLIS (AP) — Starting with his trademarked “Row the Boat” motto that touts energy, trust and optimism, University of Minnesota football coach P.J. Fleck has never lacked for clever ways to connect with and motivate his players.

The team-wide meeting on the eve of each game has become a real page-turner.

After the Gophers lost their first two games, a potentially deflating development on the heels of their 11-2 record in 2019, Fleck delivered an all-time mood-lightener the night before they played at Illinois. He read from, “ Everyone Poops,” the popular children's book written for toilet-training toddlers and their stressed-out parents.

His message? Even unpleasant things can be repurposed for good.

“In Minnesota, we’ve got lots of farms, and the poop is actually manure, and it can help with the best crops and fruits and vegetables,” Fleck said.

The Gophers beat the Illini 41-14 the next day.

“Our guys really took to it. It was perfect for us,” quarterback Tanner Morgan said.

When Fleck first convened the team earlier this fall following the Big Ten Conference's announcement that the season was back on, he cited “Goldilocks and the Three Bears.” He wanted to encourage the Gophers to strike a balance with their preparation, effort and patience that was "just right," like the young girl in the story who samples porridge, chairs and beds in an empty house before being caught by the bears who live there.

Fleck was an elementary education major at Northern Illinois. He briefly taught sixth grade social studies before a two-year playing career in the NFL with the San Francisco 49ers. He has frequently used stories to help deliver a message over four seasons at Minnesota, just as he did over four years at Western Michigan.

“We learn some of our greatest life lessons from children’s books,” Fleck said, “so it’s a way to get them to almost relax a little, have a little bit of fun, smile, connect the theme with something before they go to bed.

“We have a lot of players who never got stories read to them, never had that experience as a child,” he said. "This is about more than just football. These are life lessons.”

This type of presentation might seem gimmicky or strange, but the players are all in.

“There’s a message in there for everybody,” wide receiver Rashod Bateman said, “and coach Fleck does a good job of pulling that message out and spreading it to our team.”

Even for newcomers to the program like offensive coordinator Mike Sanford Jr., who's in his first season at Minnesota, the purpose of the exercise quickly becomes apparent.

“That's why a lot of us are here, because we’re attracted to the creativity and the leadership,” Sanford said. “Let’s just say I take a whole heck of a lot of notes.”

Fleck has long sought to develop a holistic program that can transcend football, stressing at every turn to his players the importance of growing academically, athletically, socially and spiritually. The emphasis on mental health has only been heightened during the pandemic.

“One Good Thing” is a series that highlights individuals whose actions provide glimmers of joy in hard times — stories of people who find a way to make a difference, no matter how small. Read the collection of stories at https://apnews.com/hub/one-good-thing