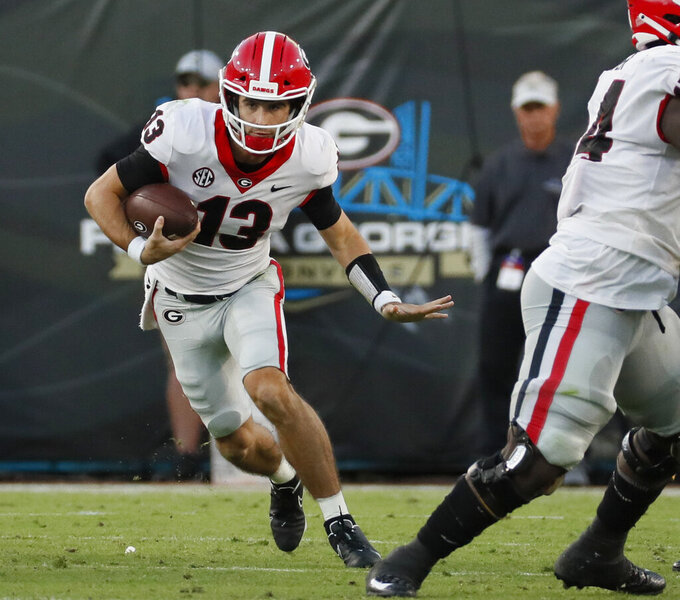 Georgia Bulldogs quarterback Stetson Bennett (13) scrambles for a first down during the second half of the annual NCCA Georgia vs Florida game at TIAA Bank Field in Jacksonville, Oct. 30, 2021. Georgia won 34-7. (Bob Andres/Atlanta Journal-Constitution via AP)

He can hardly wait.

“I’m excited ... I love it,” Drinkwitz said Tuesday as he prepared for Saturday's visit to Georgia (8-0, 6-0 Southeastern Conference).

Missouri (4-4, 1-3) is coming off last week's 37-28 win over Vanderbilt. The victory did little to impress the oddsmakers. Georgia is favored by 39 1/2 points, according to FanDuel Sportsbook.

Drinkwitz isn't put off by the lack of faith in his Tigers' chances. All he sees is an opportunity.

“Obviously as a head coach I’ve never gone against the No. 1 team in the country before, so that’s a pretty exciting opportunity,” Drinkwitz said. “... Are you kidding me? That’s what you do it for. Why else would you do it? I don’t want to live life in the shadows."

The game matches Georgia's defense, which ranks second in the nation against the run, against Missouri's Tyler Badie, who leads the SEC and ranks fourth in the nation in rushing.

Badie is crucial to offset the Tigers' weak rushing defense. Missouri ranks last in the nation with its average of 283 yards rushing allowed. Georgia allows 75.6 yards per game on the ground.

Badie has three games with more than 200 yards rushing this season, including 254 yards against Vanderbilt. He also had nine catches for 40 yards last week.

The Bulldogs beat Florida 34-7 last week and barely celebrated winning the SEC East and clinching a spot in the SEC championship game.

“We haven’t proven anything yet, all we have done is secure a spot in the SEC championship, which is not what we want to do,” said Georgia wide receiver Jaylen Johnson. "We want more than that.”

Each team has an uncertain quarterback situation.

Georgia has won five consecutive games behind backup Stetson Bennett, who took over when starter JT Daniels was unable to play due to a lat injury. Coach Kirby Smart said this week Bennett’s mobility “is a separator” before adding “there’s things that JT is better at than Stetson.”

Daniels, whose edge is his arm strength, may be close to returning.

Drinkwitz said the Bulldogs' defense, which leads the nation while allowing 6.6 points per game, can be compared with the best he has seen. He used the defenses of Clemson in 2017-18 and Alabama in 2010-11 as the units to be measured against.

“These guys are right there,” he said of the Bulldogs' defense. “They’ve got some really good players. Can really affect the quarterback.”

“I got a lot of worries. I got to figure out how to block Jordan Davis and multiple other guys on that defensive front,” Drinkwitz said.

Former Georgia coach Mark Richt will be honored at halftime. The Bulldogs won 2002 and 2005 SEC championships, and played in three other SEC title games, in Richt's 15 seasons. He posted a 145-51 record from 2002-16 and ranks 10th all-time in wins among SEC coaches.

Smart coached running backs while serving on Richt's staff in 2005.

“I learned a lot about being the right kind of person and how to run an organization the right way, and it’s meant a lot to my career,” Smart said.

Richt announced this summer he has been diagnosed with Parkinson's disease.

Badie, a senior, leads the SEC with 162.4 all-purpose yards per game. That ranks third in the nation. He has rushed for 989 yards. His 11 rushing touchdowns also leads the SEC.