No. 1 Georgia puts unbeaten record on line against Missouri 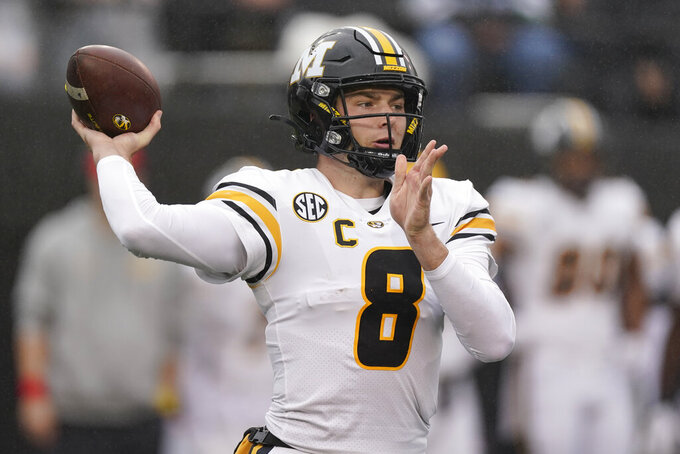 Line: Georgia by 39 ½, according to FanDuel Sportsbook.

Georgia is trying to protect its No. 1 ranking in the AP Top 25 and its top spot in the first College Football Playoff ranking of the season. The Bulldogs won the Southeastern Conference's Eastern Division and a berth in the SEC championship game with last week's 34-7 win over Florida. It's possible Georgia could land in the college football playoff even with a loss, but it is playing to retain control of its championship hopes.

Missouri senior running back Tyler Badie vs. Georgia’s run defense. Badie leads the SEC and ranks fourth in the nation with 989 yards rushing and is tied for the league lead with 11 rushing touchdowns. Badie also has 40 receptions for 305 yards and four touchdowns. Georgia, which leads the nation in scoring defense with its average of 6.6 points allowed, ranks second in the nation against the run, allowing 75.6 yards per game.

Missouri: QB Connor Bazelak threw for 218 yards with one touchdown and one interception against Vanderbilt before leaving the game with what coach Eli Drinkwitz called a “soft tissue” injury. Bazelak has passed for 13 touchdowns with eight interceptions while completing 68.2% of his passes this season. If Bazelak can't play, Tyler Macon or Brady Cook would likely fill in.

Georgia: Senior RB Zamir White leads a committee approach for the Bulldogs with 505 yards and eight touchdowns. White is running with confidence after being slowed by injuries to both knees early in his career.

Missouri's only win over Georgia came in Athens. The Tigers beat the Bulldogs 41-26 in 2013. ... Missouri ranks last in the nation in rushing defense, allowing 283 yards per game. ... Badie had 31 carries for a career-high 254 yards and two touchdowns in last week's 37-28 win at Vanderbilt. ... Missouri is the nation's only team to not lose a fumble. It recovered its only fumble against Kentucky on Sept. 11. ... Georgia's defense has scored four touchdowns and allowed five. ... The Bulldogs have allowed 53 points, the fewest allowed through eight games by Georgia since 1971, when it had allowed 46.