No. 22 Syracuse visits Liberty and coach Freeze in opener 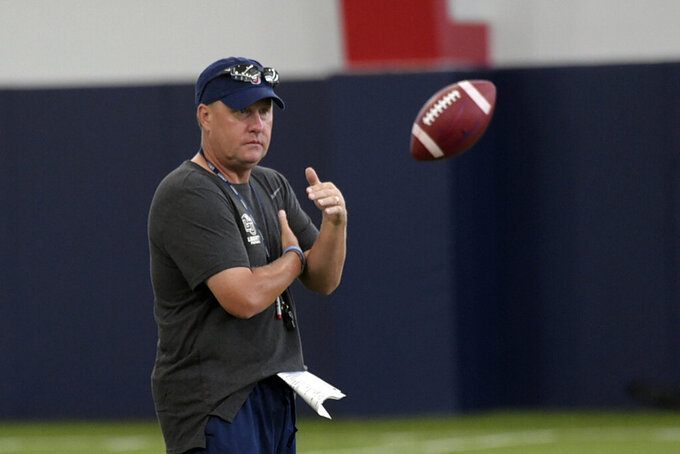 Syracuse made a huge jump last year with 10 wins after four straight sub-.500 seasons and finished with its first national ranking since 2001. There are great expectations for this season, and with No. 1 Clemson lurking in two weeks, the Orange can't afford to get off on the wrong foot. For Liberty, the game marks the much-anticipated debut of coach Hugh Freeze, whose last coaching stop was at Ole Miss.

Liberty QB Stephen Calvert vs. the Orange defense. Calvert took a step back last season, going from 29 touchdown passes and six interceptions in 2017 to 21 TDs and 18 picks last year. Freeze has emphasized Calvert's need for better preparation and that figures to be tested against Syracuse, one of the national leaders with 31 forced turnovers a season ago.

Syracuse: QB Tommy DeVito. The redshirt sophomore rescued the Orange twice last season with stellar performances in relief of former starter Eric Dungey, but this will be his first start. He appeared in eight games and completed 44 of 87 passes for 525 yards and four touchdowns with three interceptions, with most of the negative statistics coming in a 36-3 loss to Notre Dame last November.

Liberty: WR Antonio Gandy-Golden. Calvert's classmate and favorite target has 19 receptions for 245 yards and five touchdowns in the last two season openers, victories at Baylor in 2017 and against Old Dominion last year. For his career, the 6-foot-4, 220-pounder has caught 23 touchdown passes, all thrown by Calvert.

Freeze's debut at Liberty is also the first time the Flames will play host to a Power Five school and a ranked opponent. It is also Liberty's first as a full-fledged member of the Football Championship Subdivision. ... Aside from Clemson, Liberty is the only FBS team that has a 3,000-yard passer (Calvert), a 1,000-yard rusher (Frankie Hickson) and a 1,000-yard receiver (Gandy-Golden) returning this year. ... In its last nine games when playing as a ranked team, Syracuse is 7-2. It also has a 7-5-1 record in season-opening games when ranked. ... The Orange are 0-1 against current FBS independent teams in season-opening games, the setback at BYU in 2002. ... Returning players on the Syracuse defense registered 34 sacks last season, the most for any FBS team.