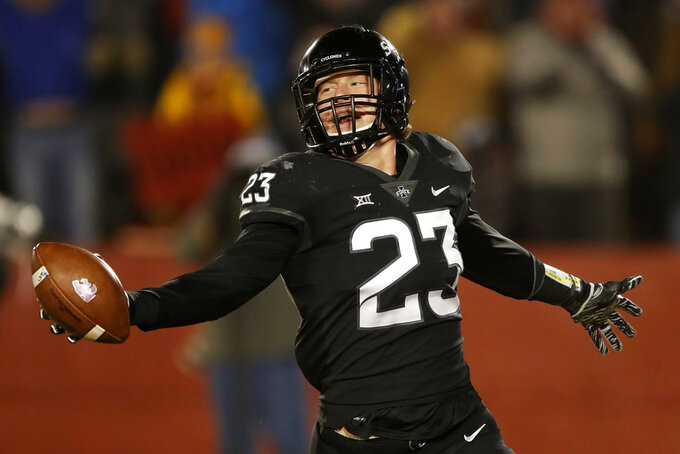 The Cyclones will end it with a surprising revival of a rivalry that stretches back 120 years.

No. 24 Iowa State (7-4, 6-3 Big 12, No. 25 CFP) was forced to cancel its Sept. 1 game against South Dakota State in the first quarter because of lighting. The Cyclones later lined up Incarnate Word as a replacement, only to see the school reach the FCS playoffs and call off its trip to Ames.

Drake, a non-scholarship FCS school just 30 miles away in Des Moines, hastily agreed to fill out Iowa State's schedule and give its players a crack at playing on the biggest stage they'll ever see. The game on Saturday will be the 70th meeting between the Cyclones and Bulldogs (7-3, 6-2 Pioneer), but the first since 1985.

"Our kids spent a lot of time and a lot of energy practicing this sport," Iowa State coach Matt Campbell said. "You only get so many shots to play the game."

Drake plays in the Pioneer Football League, considered the nation's top non-scholarship league, and it trounced Morehead State 43-6 in its last game two weeks ago. Quarterback Grant Kraemer has thrown for 2,482 yards and 25 touchdowns, and the Bulldogs' defense ranked eighth nationally in scoring defense at 18.3 points per game.

Campbell has said the biggest story of the Cyclones' season is the grace with which sixth-year senior quarterback Kyle Kempt handled losing his job to star freshman Brock Purdy. Campbell may find a way to get Kempt as much playing time as possible in a game that is being played almost solely for pride — and ticket sales — on both sides.

The game could be the final time that Iowa State juniors David Montgomery and Hakeem Butler play in Ames, as both could easily jump to the NFL. Montgomery, who is averaging 94.7 yards a game, has a shot at being a first-round pick, and Butler's 22.5 yards per reception ranks second nationally. The 6-foot-5 Butler would likely be a second-day pick if he went pro.

Iowa State leads the series 48-17-4. ... Drake will be playing in December for the first time in 46 years. The Bulldogs lost to Tennessee State 29-7 in the Pioneer Bowl in December 1972. ... Cyclones cornerback Brian Peavy is the only position player in school history to have played in wins over every current member of the Big 12. ... Drake final home game drew 1,348 fans. Iowa State's announced attendance for last week's comeback win over Kansas State was 54,430.

"We're Division I football players, too. It's not like we're just a bunch of nerds running out there." — Drake defensive lineman Nathan Clayberg.