No. 3 Clemson, No. 22 Virginia vying for ACC championship 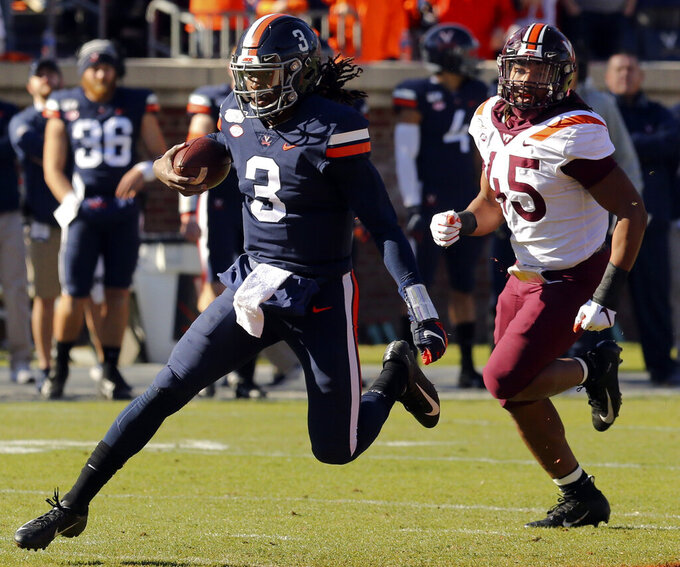 Clemson is looking to become the first program with five straight championship game victories, keeping alive its 27-game win streak and run to a fifth consecutive College Football Playoff. The Cavaliers are playing their first title game in seeking their first ACC championship since sharing the crown with Florida State in 1995.

Virginia quarterback Bryce Perkins against Clemson’s back seven. The Tigers defense has held all 12 opponents to under 300 yards this season, leading the ACC and second nationally behind Ohio State at 232 yards allowed per game. Perkins is a dynamic force for the Cavaliers with 27 touchdowns (16 passing, 11 rushing) who may be even more adept at making big things happen when a play breaks down.

Virginia: WR Joe Reed is a force on the outside, and on special teams for the Cavaliers. Reed has 3,010 yards in kick returns and is only 143 yards from tying the ACC record of former North Carolina State standout T.J. Graham. Reed also leads Virginia with 70 catches for six receiving TDs.

Clemson: LB Isaiah Simmons has been the unquestioned defensive leader for the Tigers this year. His strength may be his versatility in lining up at several different spots in the secondary, at linebacker or up front to make plays. He leads Clemson with 84 tackles, seven sacks and 14 stops behind the line of scrimmage.

Clemson is after its fifth straight ACC title and sixth in the past nine years. ... Clemson has won its past seven games by 30 or more points, which according to ESPN Stats, tied a record for most consecutive such wins in the AP poll era (since 1936). ... Virginia is on the verge of its 10th win, something it accomplished only once before when going 10-3 in 1989. ... Clemson quarterback Trevor Lawrence has thrown for 23 touchdowns and just three interceptions over his past seven games. ... Tigers tailback Travis Etienne broke the ACC mark for rushing touchdowns (53) and TDs from the line of scrimmage (57) with two scoring runs in a 38-3 win over rival South Carolina.