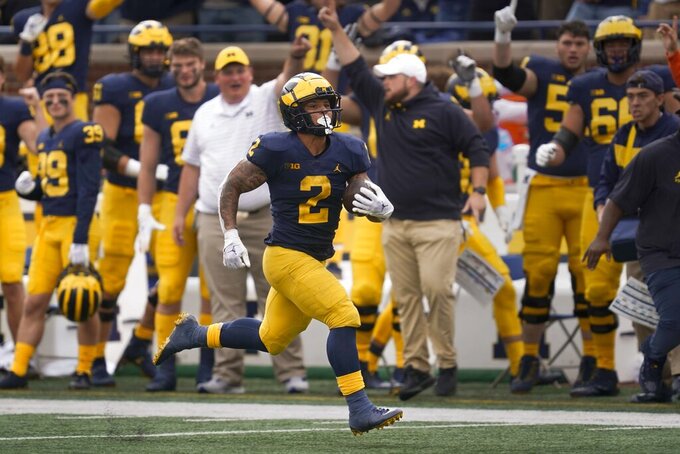 Michigan running back Blake Corum (2) runs for a 42-yard touchdown against Maryland in the second half of an NCAA college football game in Ann Arbor, Mich., Saturday, Sept. 24, 2022. (AP Photo/Paul Sancya)

Line: Michigan by 10 1/2, according to FanDuel Sportsbook.

It's a rematch of the 2021 Big Ten championship game, which Michigan won 42-3. The Wolverines get a totally different look this week after beating offense-oriented Maryland. Michigan rolled up 463 yards and averaged better than 7 yards per play against the Terrapins. Iowa gives up 3.45 yards per play, second to Alabama, and a nation-low 5.8 points per game. For the Hawkeyes to have a chance to win the West again, their worst-in-the-nation offense must make huge strides. That doesn't seem likely this week against a national top-10 defense.

Michigan RB Blake Corum vs. Iowa run defense. Corum broke loose for a career-high 243 yards against Maryland, his first time over 100 yards in nine games. Iowa gives up just 2.2 yards per carry and is one of two teams in the nation to not allow a rushing touchdown. The Hawkeyes know the shifty Corum will be a handful. He broke a 67-yard run to open the scoring in the conference title game, leaving a faked-out and fallen Iowa defender in his wake.

Michigan: QB J.J. McCarthy was good, not great, against Maryland. Now he goes into Kinnick Stadium for his first career Big Ten road start against one of the best defenses in the country.

Iowa: QB Spencer Petras will be trying to build on his best game of the season. Petras led a couple sustained drives and completed 11 of 17 passes for 148 yards against Rutgers. That's progress for the quarterback with the lowest rating in the Big Ten.

Michigan and Iowa have split their past 10 meetings, but the Hawkeyes have won four straight in Iowa City. ... Michigan's 50 points per game leads the nation. ... WR Ronnie Bell has caught at least one pass in 19 straight games for the Wolverines. ... Iowa is 5-3 against top-five opponents at home. ... The 23 points allowed by Iowa are the program's fewest through four games in 66 years. ... Iowa will honor its 2002 Big Ten championship team. The Hawkeyes went 8-0 in league play and 11-2 overall that season.