No. 6 Clemson uses goal-line stand to hold off Georgia Tech 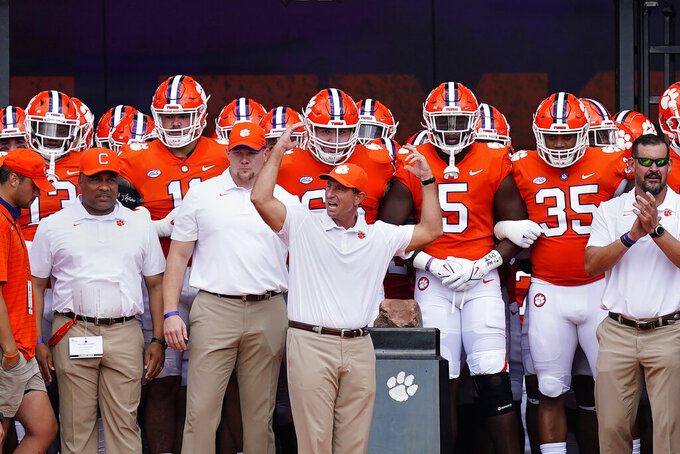 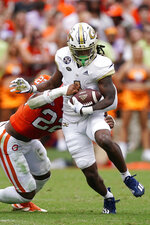 Swinney said the Tigers' attack is closer to its strong past than it has looked this season, including in a 14-8 victory over Georgia Tech on Saturday night.

“I didn't get a whole lot of reward from what I've seen” on offense, Swinney said. “But we'll get there.”

How soon is what many are wondering, accustomed to watching the attack for Clemson (2-1, 1-0 Atlantic Coast Conference) light up scoreboards and win championship.

“We made a lot of mistakes, my gosh,” Swinney said. “But we won the game.”

Will Shipley ran for two touchdowns and the sixth-ranked Tigers had a goal-line stand in the final seconds in a wild ending.

The Yellow Jackets (1-2, 0-1) had a chance to force overtime after recovering an onside kick with 1:19 to play. But they were held out of the end zone on four plays from the Clemson 2 in the closing seconds — the last when linebacker James Skalski t ackled Dylan Deveney a yard short.

The chaos continued, though, when Shipley fumbled in the end zone with Clemson (2-1, 1-0) attempting to run out the clock and was tackled after recovering for a safety with seven seconds left.

“I knew I had to get that ball back,” Shipley said.

The game was delayed nearly two hours just before the half because of the threat of lightning around Memorial Stadium.

Clemson was favored by nearly four touchdowns and had beaten the Yellow Jackets 73-7 a season ago. This time, though, Clemson and quarterback D.J. Uiagalelei couldn't get the offense going for the second time in three games.

Clemson was held to 180 yards in a 10-3 loss to No. 2 Georgia two weeks ago. Georgia Tech limited Clemson to 207 yards the first three quarters and it continually came up with third-down stops.

Shipley opened things with a 3-yard touchdown run in the first quarter. But that was it for the offense until very late in the game before Shipley's 3-yard bull-rush into the end zone let much of the remaining fans who returned after the delay exhale.

Clemson's defense has played at a championship level so far. The group has yet to yield a TD, holding its first three opponents to a total of four field goals. Georgia's touchdown in the opener came on a pick-six interception.

“The name of this game is points,” Swinney said. “And when the other team can't score, you're going to win a lot of games.”

Yates drove his team to Clemson's 5 at the end of both halves. The Yellow Jackets left with a field goals both times. He finished 20 of 33 for 203 yards.

It's clear Clemson does not have the same rhythm on offense it did the past three years when a pair of NFL first-rounders in quarterback Trevor Lawrence and tailback Travis Etienne were leading the way.

Clemson offensive coordinator Tony Elliott said Georgia Tech used a defensive scheme designed to take the deep ball away from Uiagalelei. During the team's extended half-time, weather delay, Elliott said the Tigers knew they had to stick to the ground.

“Hey, we're going to have to run the football to win this game,” he said.

To struggle this much this season was not expected out of Uiagalelei and heralded running prospects like Shipley and sophomore Kobe Pace.

The Tigers didn't score a touchdown in the opener against Georgia, where Uiagalelei was sacked seven times and misfired several passes.

Things appeared on the right track a week ago when Clemson scored touchdowns on its four opening possessions — Uiagalelei ran for two touchdowns and threw for a third — in a 49-3 blowout of South Carolina State.

But the Tigers again couldn't get anything going against a Georgia Tech defense ranked ninth in the ACC in points allowed at just fewer than 20 a game.

No matter the defeat, Georgia Tech coach Geoff Collins said the group of Yellow Jackets that played against Clemson, “they can play with anybody.”

Georgia Tech: The Yellow Jackets certainly come away with a jolt of confidence after playing toe-to-toe at Clemson, despite their seventh straight loss to the Tigers. It's unlikely they'll see another defense as deep and talented in the ACC.

Clemson: The Tigers have work ahead if they hope for a seventh consecutive ACC title and trip to the College Football Playoff. Their defense is championship caliber. The offense is not and Uiagalelei and offensive coordinator Tony Elliott must find some answers quickly.

Expect Clemson to slide in the new rankings because of the showing against Georgia Tech. The Tigers, who entered the season ranked No. 3, could slip out of the top 10.

Clemson won its 30th straight game at Death Valley, continuing its record run. The streak is the longest in the country and seemed in jeopardy — the Tigers hadn't lost at home since a 43-42 win by Pitt here in November 2016 — down the stretch as Georgia Tech kept control of the ball at the end.