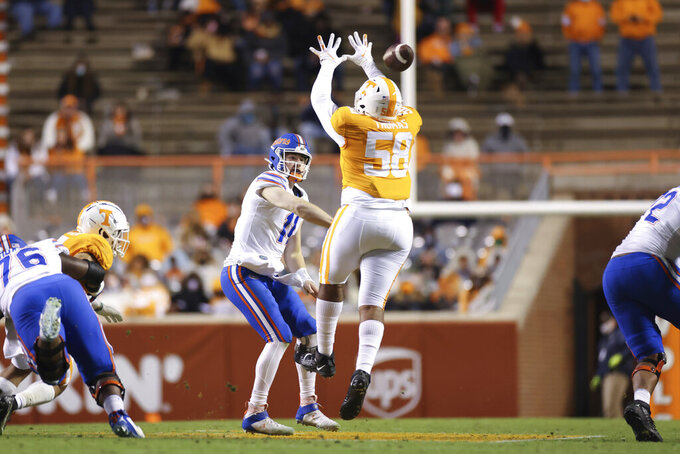 KNOXVILLE, Tenn. (AP) — No. 6 Florida had some trouble on the ground.

The air was no problem.

Kyle Trask threw for 433 yards and four touchdowns, and the Gators beat Tennessee 31-19 on Saturday to clinch a spot in the SEC championship game.

Trask, a front-runner for the Heisman Trophy, put together another impressive performance. He completed 35 of 49 passes without committing a turnover. He even had a 32-yard punt late in the game.

Kyle Pitts had seven receptions for 128 yards, helping the Gators (8-1, No. 6 CFP) wrap up the SEC’s East Division. Kadarius Toney finished with eight catches for 108 yards and a TD.

“It feels amazing,” Trask said of the division title. “You know that was one of our main goals at the beginning of this season, because in order to do all the, you know, the bigger things you first have to win the East. So that was our first main goal.”

The aerial performance by Trask and company took on added significance with Florida struggling to run the ball, finishing with just 21 yards on the ground.

“I didn’t realize they ran the football,” Tennessee coach Jeremy Pruitt deadpanned. “It felt like they threw on every snap.”

Playing with a depleted roster, Tennessee (2-6) dropped its sixth consecutive game. The Vols were missing 16 players.

Freshman Harrison Bailey got the start at quarterback. He completed 14 of 21 passes for 111 yards and a 15-yard touchdown to Eric Gray. He was sacked five times.

“Bailey held onto the ball too long some times,” Pruitt said. “But that’s what a young guy will do.”

Trask has 38 TD passes this season, moving him into sixth place in SEC history for a single season, ahead of Texas A&M’s Johnny Manziel and Tim Couch of Kentucky. He has the most TD passes through a team’s first nine games.

Five plays into the second half, the outcome was all but decided. Florida stretched a 10-point halftime advantage to 24-7 with a 75-yard drive capped by an 8-yard pass from Trask to Trevon Grimes. The big play in the sequence was a 48-yard connection between Trask and Pitts, a 6-foot-6, 246-pound tight end.

“(Pitts is) really hard to guard,” Pruitt said. “When he’s at wide receiver, he’s tough to guard. They’ve got a really good scheme.”

Early in the fourth quarter, Florida upped the lead to 31-7 when Trask found Jacob Copeland for a 12-yard TD.

Quarterback J.T. Shrout came off the bench to lead the Vols to two late touchdowns. Ty Chandler ran the ball in from 7 yards, then Velus Jones, Jr., caught a 22-yard scoring pass.

Florida took a 17-7 lead into the locker room at intermission. Tennessee’s defense turned the Gators offense into a one-dimensional attack — but with Trask behind center, it was more than enough.

While the Gators generated just 1 net yard rushing in the first 30 minutes, Trask had plenty of success. He completed 21 of 28 passes for 251 yards and accounted for both touchdowns — a 4-yard toss to Grimes and a 2-yarder to Toney.

“I think they did a great job — Tennessee — throughout the game of giving us some different looks," Trask said. "You know, trying to, you know, put more guys on Pitts to shut that down, and we just got to adjust as an offense.”

After a field goal on Florida’s first possession, Tennessee responded. Bailey engineered a 96-yard drive, most of which happened in the second quarter, and topped it off with a TD pass to Gray out of the backfield.

Florida answered with its first touchdown. Then it got interesting.

Down 10-7, the Vols were faced with fourth-and-5 on their own 30-yard line. Punter Paxton Brooks faked the punt and threw a pass to an open Jimmy Holiday. What would have been a first down was dropped by Holiday.

The mistake didn’t hurt, though. The Tennessee defense stiffened and forced the Gators into a field goal attempt from 53 yards. Evan McPherson missed wide right.

Sixteen Tennessee players missed the game. Freshman Cooper Mays got his first career start at center in place of senior Brandon Kennedy, who moved to left tackle. The Vols also turned to Bailey for his first start ahead of redshirt senior Jarrett Guarantano.

Florida: The Gators reached the SEC championship game for the first time since 2016. The division title "shows where the program’s at,” coach Dan Mullen said.

“When we’re (up) 31-7 when clean-up time starts and we kind of just clean up the game to finish it out and we say that’s not a very good game by us or not one of our great performances, it shows where we’re at as a program, which I think says a lot," Mullen said. "I’m really proud of our guys.”

Tennessee: The Vols’ six-game losing streak is the program’s longest since starting the 1988 season with six straight losses.

Florida closes out its regular season Saturday with a home game against LSU.

Tennessee will travel to Nashville for a meeting with rival Vanderbilt.