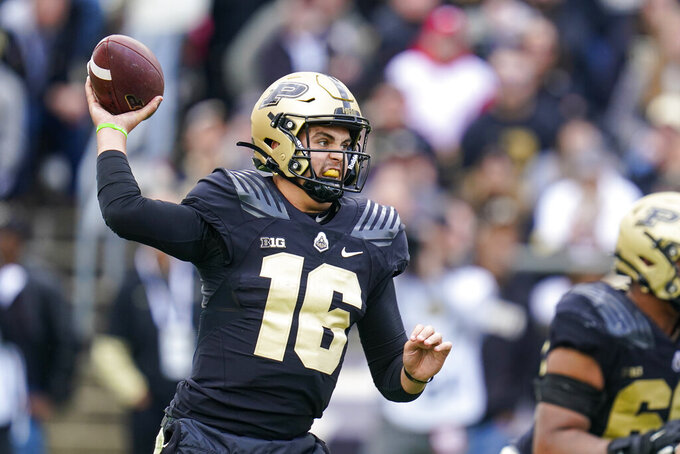 FILE - Purdue quarterback Aidan O'Connell (16) throws a pass against Wisconsin during the first half of an NCAA college football game in West Lafayette, Ind., Saturday, Oct. 23, 2021. Penn State thinks it can unseat Ohio State and Michigan as the top team in the Big Ten East. Purdue believes it can win the wide open Big Ten West. Thursday night's season opener could play a big part in what happens next. (AP Photo/Michael Conroy, File)

Aidan O'Connell arrived at Purdue in 2017 as a hopeful, exuberant teenager.

He set out to prove a walk-on could win the starting job at the “Cradle of Quarterbacks” and lead the Boilermakers to postseason success. O'Connell routinely stayed after practice for extra snaps, gladly fine-tuned his skills with the scout team and even opted to stay when other schools presented more promising possibilities.

The reward comes Thursday night when O'Connell celebrates his 24th birthday in front of a sold out Ross-Ade Stadium and a national television audience for Purdue's season opener against Penn State.

And he's here, on center stage, for one reason — he never stopped dreaming.

“He came in knowing he had to start from the bottom and prove to everybody beyond a reasonable doubt he could be the guy,” Purdue coach Jeff Brohm said. “As coaches we gave him those opportunities and sometimes we gave it to someone else, but he stayed with the same work ethic, the same mentality."

Getting to this point sure wasn't easy.

O'Connell bided his time for two years behind future NFL player David Blough and strong-armed Elijah Sindelar. Then O'Connell watched Nick Sipe and Jack Plummer move ahead of him on the depth chart. When they transferred out, Brohm brought in Austin Burton from UCLA.

And while each supposedly possessed more natural talent than O'Connell, none could top his moxie. Teammates noticed it from the start and eventually Brohm caught on, too.

While O'Connell didn't play in 2017 or 2018 and only got his first real chance to take snaps because of injuries to Sindelar and Plummer in 2019, he took advantage of the opportunity by winning the quarterback competition heading into the pandemic-shortened 2020 season. Three games later, his season ended because of an ankle injury.

Yet today, O'Connell acknowledges it was that journey that allowed him to grow as a player.

“To be honest, I think I needed those times and those moments in the shadows to develop," O’Connell said. “I wasn’t ready to play my first year. I probably wasn’t even ready to play my second year. But having those two years to get more lifting, more film study, more practice definitely helped."

Losing records in 2019 and 2020 didn't just keep the Boilermakers out of the postseason or help O'Connell's cause. It had fans clamoring for a new quarterback last season.

But it only made O'Connell more determined to prove the doubters wrong and this time, his historic performance left no doubt he could win.

O'Connell's 71.8% completion percentage and 158.8 passing efficiency rating set single-season school records and he produced top-five numbers in completions (315), yards passing (3,712) and touchdowns (28) despite serving as the backup for the first 3 1/2 games.

The nine wins, six of which came with O'Connell as the starter, were the second most in school history and he beat top-five teams, won a bowl game, earned second team all-Big Ten honors and the respect of everyone around the program.

“I think the biggest difference is just his confidence, knowing he has his full team behind him, knowing we believe in him 100%," linebacker-safety Jalen Graham said.

Clifford, like O'Connell, finds himself in a very different place than when he joined the Nittany Lions all those years ago. Both have earned bachelor's degrees — O'Connell also has a master's and Clifford is pursuing a second degree. Both openly talk about how their college experiences have provided a different perspective on life, and both have aspirations beyond football.

As O'Connell got married, Clifford started a company to help college athletes land NIL deals and became an outspoken proponent of conferences and the NCAA providing more benefits to athletes.

Now, though, both are all about football and winning enough games so one of them can hoist the Big Ten championship trophy for the first time.

Penn State hasn't played in the conference championship game since 2016 and it would be quite an achievement for Clifford and his teammates.

But for O'Connell, who grew up in Illinois, making the short trek from West Lafayette to Indianapolis in December would be a fitting cap to a monumental accomplishment — becoming the first walk-on to ever start for the Boilermakers, whose QB alumni include the likes of Drew Brees, Bob Griese and Mark Herrmann.

“He's just done a really good job, from working hard to having a great attitude to learning the offense, becoming a better, more accurate passer each and every year," Brohm said. ““He had to earn it the hard way, nothing was handed to him. He’s just always done the right thing.”