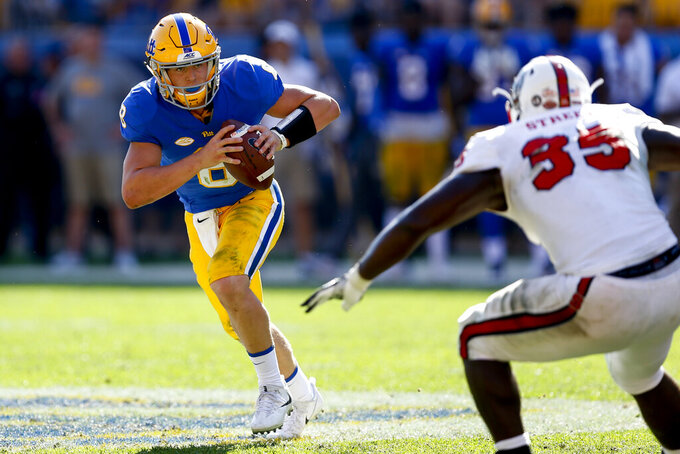 FILE - In this file photo from Oct. 14, 2017, Pittsburgh freshman quarterback Kenny Pickett (8) plays in an NCAA college football game against North Carolina State, in Pittsburgh. The senior quarterback is looking to make the most of his decision to return for a fifth season instead of going to the NFL. Pickett was leaning toward entering the NFL draft before changing his mind last December. (AP Photo/Keith Srakocic, File)

PITTSBURGH (AP) — Tre Tipton knows how this goes. The Pittsburgh wide receiver, one of only a handful in the country entering his seventh — yes, seventh — season, knows there's only one real way to create a legacy.

And it's not by just scraping by.

Something the Panthers have failed to do during Tipton's lengthy career. Pitt has floated somewhere between 5-7 and 8-5 during his tenure. The player who has become a champion of mental health advocacy and is working on his master’s degree in social work knows time is up.

“We all believe we can go out there and win a championship,” Tipton said. “We're stronger than we've ever been, but we're also together. A key word: together. We love each other. And that is one of the biggest, brightest things that I’ve seen in this team overall.”

To the point where the Panthers spent training camp with “team” emblazoned on the back of their practice jerseys, an idea put forth by the program's leadership council and embraced by the coaching staff.

Time to see if all that togetherness translates into the legacy Tipton wants the seniors to leave. Pitt opens a season of high expectations on Saturday against Massachusetts, eager to get off the treadmill of “ok but not great” the Panthers have been on since they joined the ACC in 2013, including a 6-5 mark in 2020 that ended with the players voting not to go to a bowl game.

The nonconference portion of the schedule appears user-friendly, at least on paper. Pitt will host UMass, Western Michigan and New Hampshire this month sandwiched around a trip to rebuilding Tennessee on Sept. 11.

Coach Pat Narduzzi, however, stresses his team is not getting ahead of itself. And with good reason. The Panthers appeared to be on the verge of a breakout last fall after a 3-0 start saw them crack the AP Top 25. Four straight losses followed.

Still, he likes where the team is at as he enters his seventh season at the helm.

“The culture here I think is great and that’s why we’ve got guys that stick it out and play and guys that come back and play a fifth year or sixth year or seventh year for Tipton,” Narduzzi said.

UMass, meanwhile, is still searching for an identity under third-year coach Walt Bell. The Minutemen are just 1-15 since Bell replaced Mark Whipple — who is now Pitt's offensive coordinator.

Whipple, who led UMass to a Football Championship Subdivision title in 1998, insists there are no hard feelings after he was let go following a bumpy second stint with the program from 2014-18 after it transitioned from FCS to the Football Bowl Subdivision.

“It’s a great place, great school,” Whipple said, later adding, ”I spent 11 years there, had a lot of good times."

He's eager to create new ones with the Panthers.

Pitt's biggest issue in recent years has been the inability to create any kind of offensive balance. The school that used to turn out high-octane running backs with regularity has finished outside the top 100 in yards rushing in each of the last two seasons.

While Narduzzi has liked what he's seen during camp, he's also in no hurry to anoint anyone as the full-time starter. Senior A.J. Davis, junior Vincent Davis and sophomore Israel Abanikanda all had “or” listed next to their names on the depth chart.

The Panthers have evolved into one of the best pass-rushing teams in the country during Narduzzi's tenure. Pitt's 97 sacks over the last two seasons are the most by any FBS program over that span. While defensive linemen Patrick Jones II and Rashad Weaver have moved on to the NFL, Pitt remains deep along the defensive front, which will be led by senior Keyshon Camp.

UMass has dropped 11 straight games dating to 2019, two games behind Kansas for the longest active streak in the FBS. There has been an influx of talent thanks to the transfer portal. The roster features 10 players who played at Power Five schools before joining the Minutemen, leaving them a bit of a mystery to the Panthers. Tyler Lytle, a graduate transfer from Colorado, will make his first collegiate start against Pitt.

“It’s a totally different football team,” Narduzzi said. “It’s not like you’re going to see the same team we saw last year. They had a spring like we did. I think they feel like they reloaded, and have some guys that can play. So it’s going to be a challenge and you don’t know what you’re looking at."