Rice, No. 15 Marshall set to return after extended down time 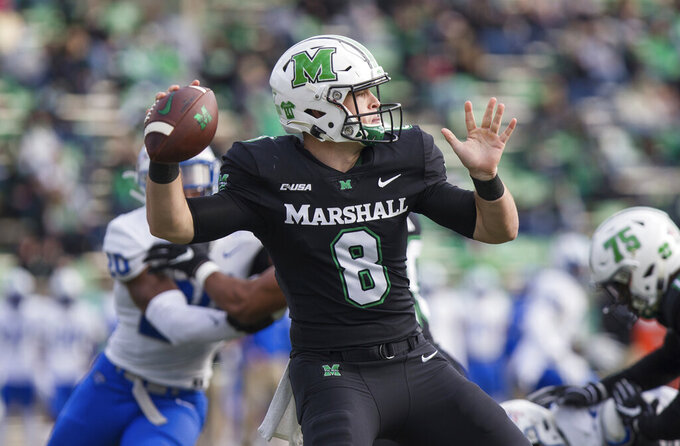 FILE - Marshall quarterback Grant Wells (8) throws a pass against Middle Tennessee during an NCAA college football game in Huntington, W.Va., in this Saturday, Nov. 14, 2020, file photo. Rice and No. 15 Marshall meet on Saturday, Dec. 5 in a game that was postponed from Oct. 3. (Sholten Singer/The Herald-Dispatch via AP, File)

Being able to get back onto the field after a slew of coronavirus-related cancelations in the past month is a step forward for coach Mike Bloomgren and the Rice Owls. Their test this week: Trying to slow down No. 15 Marshall and its balanced offense.

Marshall (7-0, 4-0 Conference USA) has been dealing with its own down time as the Thundering Herd hone in on a berth in the league championship game and hope to move a step closer Saturday against the Owls (1-2, 1-2).

“What a great challenge for our guys, a chance to go up there and test our mettle against what is the best in our conference at the moment,” Bloomgren said.

Marshall’s offense has been proficient in both the run and the passing game. Running back Brenden Knox has five 100-yard rushing games this season, And on the rare occasion Knox gets little room, quarterback Grant Wells is there to move the ball.

“The bottom line is, if you don’t start with stopping the run, that offensive line and Knox will run through you,” Bloomgren said.

Marshall showed its ability to switch gears in the second quarter of its last game on Nov. 14 after Middle Tennessee found a way to slow down Knox.

Wells went on to record season highs in every major category, including 336 passing yards and five touchdown throws, in the 42-14 win.

Marshall is averaging 245 passing yards and 206 rushing yards per game. But the Thundering Herd haven’t played in three weeks after its Nov. 21 home game with Charlotte was postponed due to COVID-19 issues with the 49ers. Marshall had a bye last week.

Marshall has had multiple other games called off, too. None have come due to COVID-19 issues on their own side.

“These kids have been at it a long time,” Marshall coach Doc Holliday said. “I think what's great is I think there's a lot of teams out there that weren't able to handle the situation. A lot of teams that are normally great football teams that are not very good teams this year because they couldn't handle everything the players had to do and put up with. Our kids have been able to do that.”

“We've got to do everything we can possibly do to keep this thing rolling.”

Saturday’s game originally scheduled to be played Oct. 3 but was postponed after Rice pushed back the start of its fall practice to late September due to COVID-19 concerns in the Houston area.

Rice's home game last week against UTEP was canceled due to positive virus tests and contract tracing issues within the Miners' program. The teams were in place to take the field when the start of the game was delayed pending a second round of tests involving UTEP.

It was the third game in four weeks to be called off for Rice.

“Its important to tell you what I told the team. With the number of cancelations we've had, the last weekend felt like a loss,” Bloomgren said. "I can't have them feeling that way because this is not something we were in control of. We were ready to play. I just had to remind them, this is not on us."

Rice quarterback Mike Collins has thrown 10 TD passes and one interception in three games. His average of 267 passing yards per game is first among Conference USA quarterbacks.

Marshall is first in the Bowl Subdivision in rushing defense and second in total defense, while its offense puts up solid numbers every week. But Wells said the team is nowhere near perfect.

“We haven’t arrived. To be honest, I don’t think we’ll ever arrive," Wells said. “That’s the point of playing this game is you’re always chasing perfection. We’re always going to make mistakes. Everybody knows that. It’s just how you improve on those mistakes and you’re not making them twice.”

The game features a pair of standout linebackers: Rice’s Blaze Alldredge has 32 tackles and a sack, while Marshall’s Tavante Beckett has 69 tackles, four fumble recoveries and a forced fumble.

Rice’s Austin Trammell has made the most of the opportunities given him. The senior has six touchdown receptions in three games and is averaging 112 receiving yards per contest, good for 10th in the FBS.