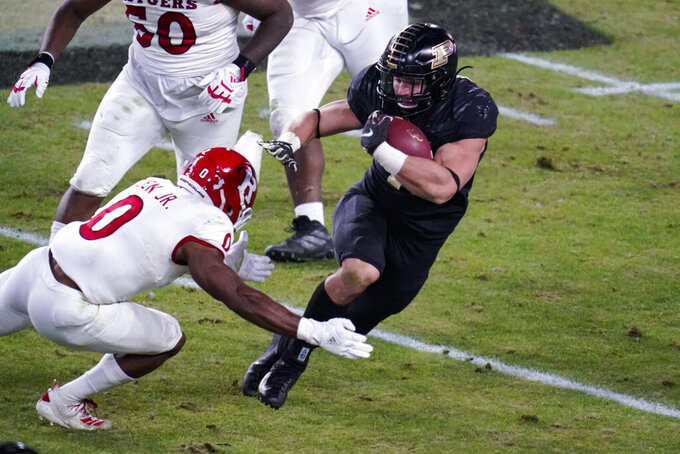 Purdue coach Jeff Brohm watched the momentum swing in the blink of an eye Saturday.

With two backups filling in for injured players on the kickoff coverage unit, Aron Cruickshank brought the ball out from the end, found a seam, split two defenders and outran the rest for a 100-yard touchdown. It cut a 10-point deficit to three and the Boilermakers never recovered.

The offense didn't score another point, the defense couldn't get off the field and Purdue lost its third straight.

“That kind of sparked them quite a bit in being able to run the football and just get chunks of yards when they needed to," Brohm said Monday. “All that is a part of winning and losing and we’ve got to create our own momentum. That’s up to us. We’ve got to do a better job of it.”

Following the game, the focus turned to Purdue's struggles to stop the run and get off the field in the second half. Cruickshank's game-changing play exposed another problems: special teams miscues that proven especially costly this season.

Northwestern returned a short kickoff in the first half to the 38 and quarterback Peyton Ramsey took advantage of the short field to lead the Wildcats to a tie-breaking touchdown. Northwestern won 27-20.

At Minnesota, the Boilermakers had a short field goal blocked in the first half and a 33-yarder sail wide with 4:08 left to play. Instead of tying the score, Minnesota held on for a 34-31 victory.

"We had a couple backups come in and didn’t do exactly what they were supposed to do,” Brohm said. “When that happened, it allowed the ball to bounce and once it bounced to the outside we were stuck.”

While the Boilermakers' opponents have blocked at least one punt or field goal in each of Brohm's four seasons in West Lafayette, Purdue hasn't blocked a punt since 2017, a field goal since 2018 or an extra point since 2015.

The only Boilermaker to top 19 yards on kickoff returns with four or more touches over the last four seasons is Rondale Moore, who averaged 20.06 in 2018. Opponents, meanwhile, have run kickoffs back for an average of 23.42, 21.44 and 19.65 yards over the previous three seasons. This year, it's 28.91 yards.

And through five games this season, Purdue has exactly four total yards on punt returns. Only 12 teams have a lower total.

“What has to happen is all three segments of our team need to play better and we need to play together and we all need to do our part in order to win these close games," Brohm said. “That means our coaches have to coach our tails off all week and put the best plan together, and our players have to want to go out there and play aggressive and physical and try to find a way to win these games."